Covid-19 Coronavirus impact on economic activity. We expect that this may get worse before it is finally over – Wait For Next Low Risk Energy BUY Signal – We are getting close.

The rapid rise in cases world-wide in the now called Covid-19 coronavirus, has caused concern about the timetable for China to get its economy on track. How do you avoid getting the infection if you are ordered back to work? As of February 17th 71,520 cases are now known (Chart #1). 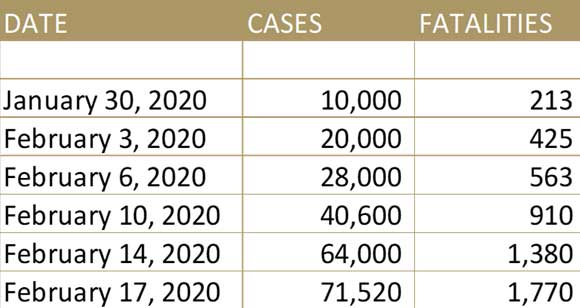 Some key facts and observations: 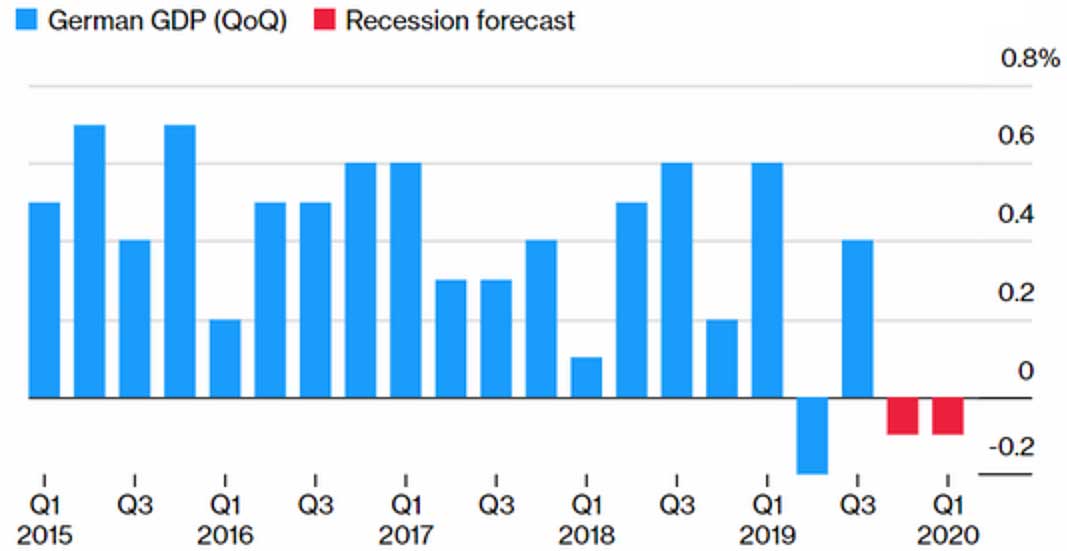 The start of the new commodity bull cycle started with the lift in precious metals prices. The CRB Index also lifted but has pulled back as China fights the virus and its industry is halted. Gold has reached new highs in recent weeks with a push over US$1,600/oz (Chart #3) while the CRB retreated to the lower end of its recent range (Chart #4). It is currently range bound between 202 and 167 (close Friday February 14th @ 173). A breach above 202 once the virus issue is behind us would be a powerful positive for the commodity board. 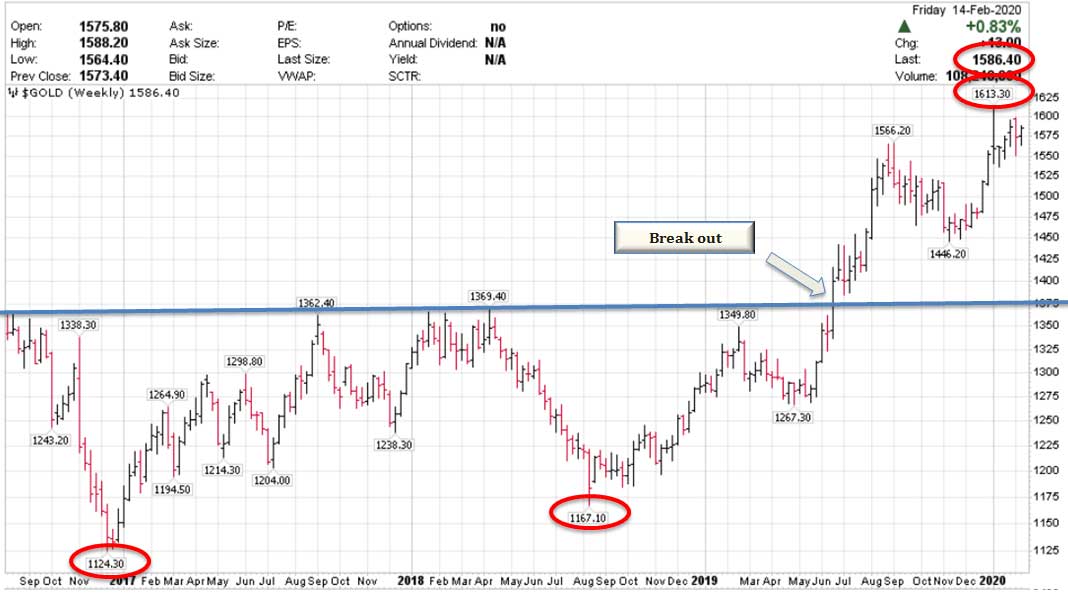 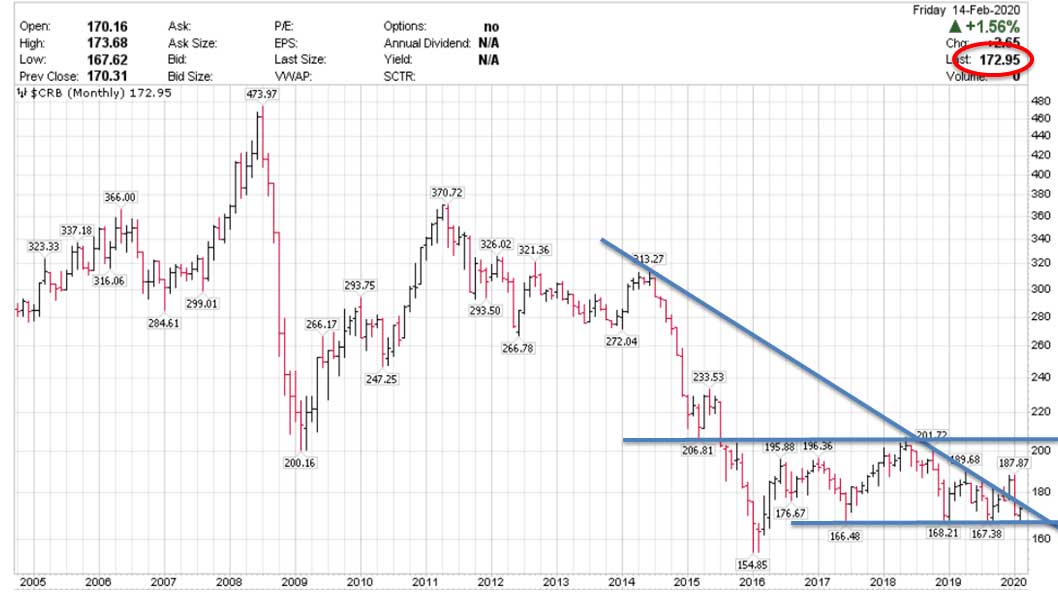 Due to the fears about the virus the US dollar has lifted (Chart #5) but not so much as would have been expected when markets fear the unknown. The dollar remains range bound between 96 and 100 and is below the high of 103.82 as seen in late 2016. A significant breach of 96 after the virus is contained would be another positive for the commodity board. On the fundamental side the move to lower interest rates in the US and rising deficits go hand in hand to weaken the dollar. 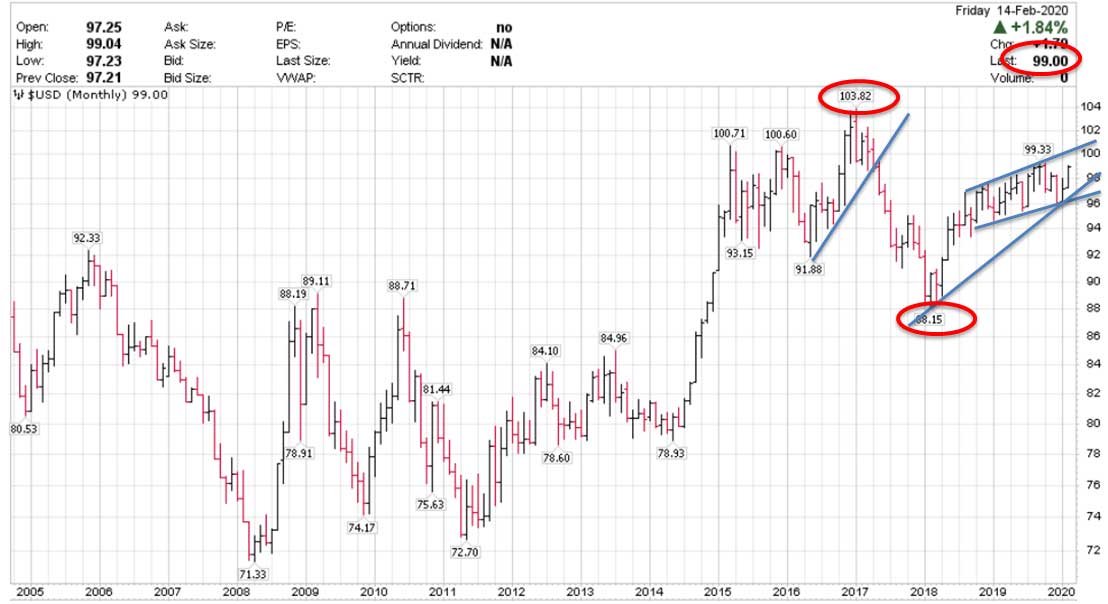 Crude oil rallied over the last two weeks by US$3/b to US$52.05/b as of the close of February 14th. The price is now range bound between US$49-65/b (Chart #6) and could easily bust the low of US$49.31/b if the virus issues persist or if OPEC does not make the meaningful cut in production that they are talking about doing imminently. The delay is due to Russia’s reluctance to join the deal. If the virus issue gets worse it is likely that they will be persuaded to join the additional 600,000 b/d Saudi proposed cutback. 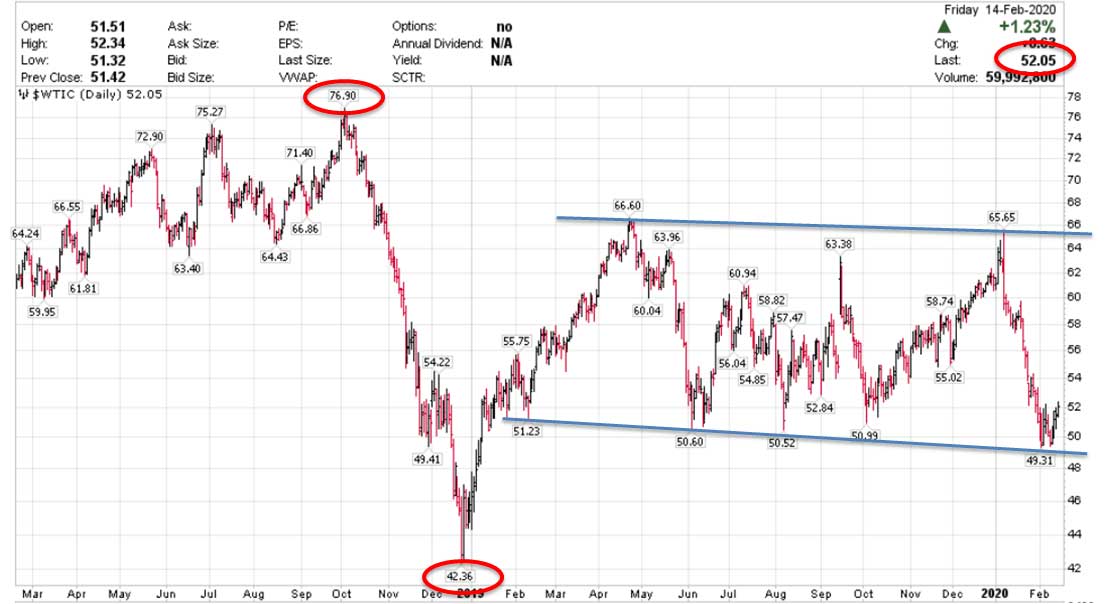 On the positive side OPEC production (Chart #7) fell in January by 509,000 b/d as they had agreed but the mix was different than expected. Saudi Arabia was expected to cut by 400,000 b/d but increased production by 57,000 b/d to 9.73Mb/d. The reason for the decline was the frightful fall from Libya which saw production decline by 344,000 b/d as the civil war in the country intensified. It has fallen even further recently (Chart #8) to just under 200,000 b/d. This may alone offset recent lowering of China demand but could swing around quickly. As the chart shows a peace deal could swing production up quickly as it did in 2011-2012. 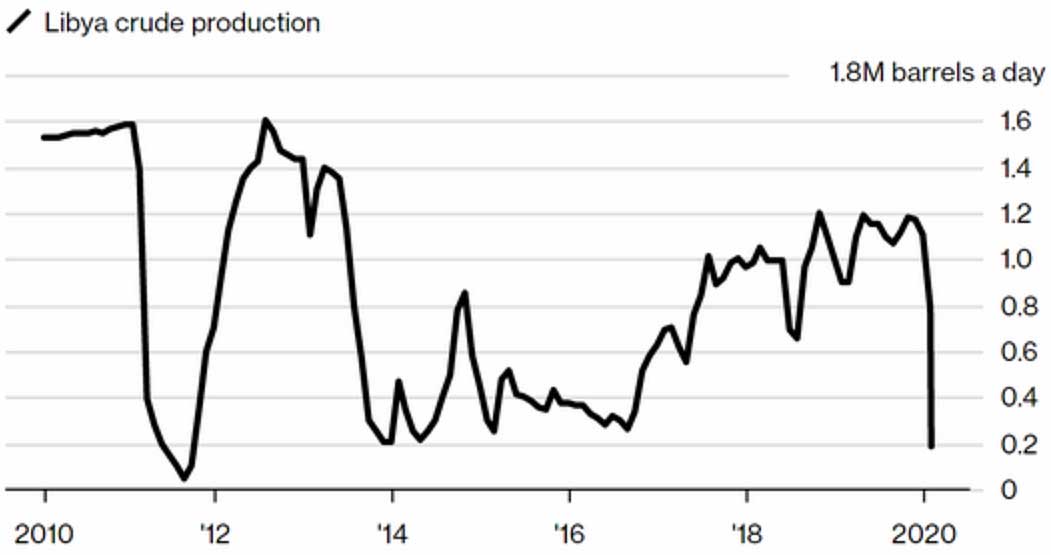 Overall OPEC produced 28.86Mb/d in January and the call on OPEC in Q1/20 is 28.9Mb/d so they are OK for now if China resolves itself quickly. None of the OPEC data considers a prolonged and worsening China. The reason for the proposed cut is that the call on OPEC falls in the spring by 600,000 b/d in Q2/20 to 28.29Mb/d (Chart #9). This of course could requires a bigger cut if OPEC does not want to see a big build in inventory during the quarter. If they implement the cut and adhere to it, when demand picks up in the summer months to over 30Mb/d inventories will tighten and crude prices will firm up as is our expectation.

Balance Of Supply And Demand In 2020

Crude inventories continue to rise in the US and dampen prices. Last week the EIA showed a rise of 7.5Mb on the week (Chart #10). If exports remain sluggish due to world trade being hampered by the virus and China does not buy crude, LNG or other products from the US in the near term, it is likely we will see prices erode. A breach of US$49.31/b could cause a quick decline of US$4-5/b to our target level of US$44/b. US Gasoline inventories are too high, as in days of supply at the present time and again forecast lower prices ahead (Chart #11). 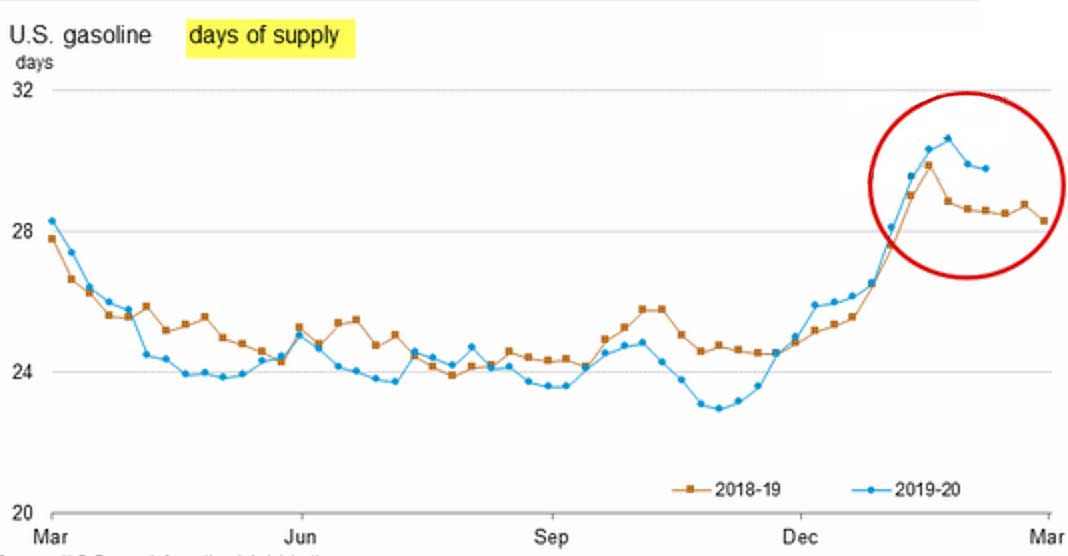 A positive contributor for higher prices later this year and in the coming years is that the US industry is being forced to be profit focused, with the need to spend less than cash flow. The EIA Productivity Report for February production of crude oil from the shales (Chart #12) shows an increase of only 22Kb/d to 9.2Mb/d. Three of the six shale basins are now showing declines with only the Permian still showing meaningful growth. In February that is estimated at 45Kb/d to 4.8Mb/d. Annualizing the 22Kb/d overall increase means that US production may grow by only 264Kb/d in 2020 much below the consensus of over 1.0Mb/d. We will be watching this carefully. 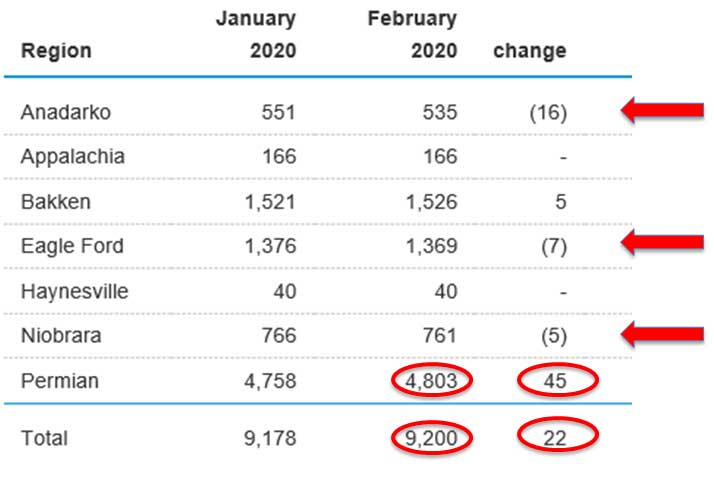 One key supporting factor is that the US industry is being forced by investors and Bay & Wall street to be profit focused and spend less than cash flow. The Baker Hughes rig count data for February 14th (Chart #13) shows overall rig activity is down 25% from a year ago and the oil rig count is down 21% from a year ago. This supports the view that US production growth seen over the last few years is over and a treadmill level is now likely. 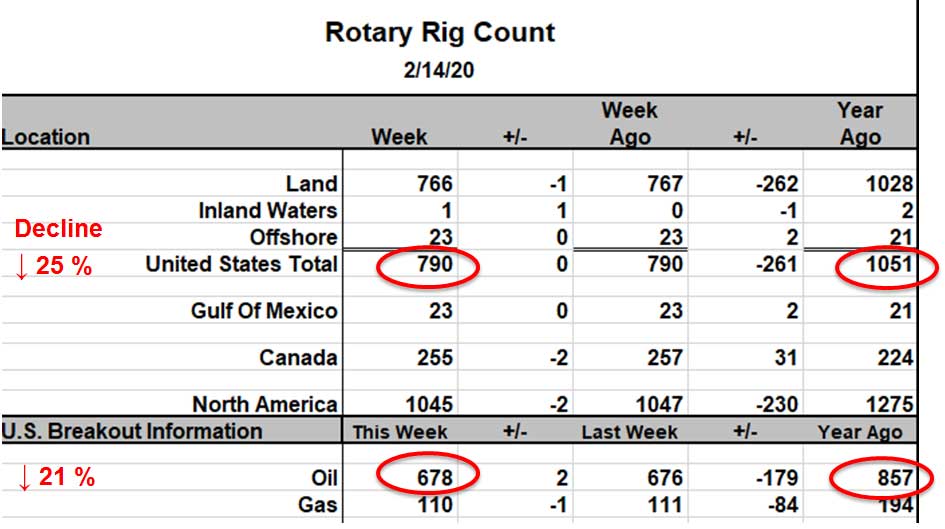 Our expected range for crude oil is updated on Chart #14. In Q1/20 the price has gone down to as low as US$49.31/b versus our original pre-virus forecast of US$50/b. We have not yet adjusted for the likelihood of a fall to US$42/b. If China’s viral issue explodes with more cases and the price of crude breaches US$49.31/b meaningfully, the lower price target of US$42-44/b will be much more likely (Chart #15). 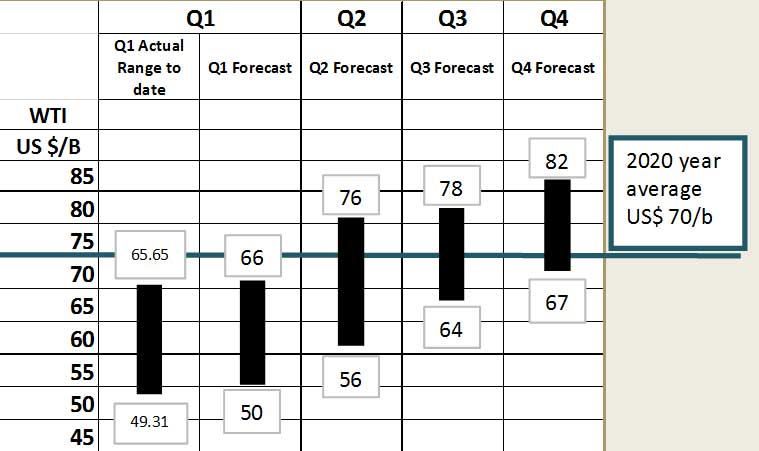 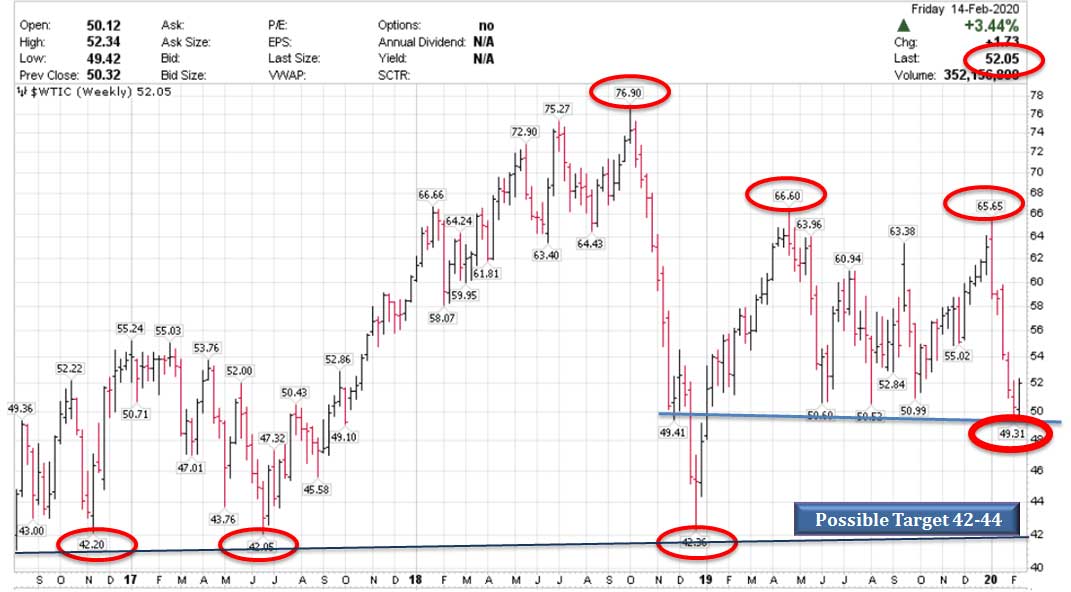 If we do see the breach of US$49.31/b in the coming weeks, the last phase of the current decline in energy stock prices should unfold. The S&P/TSX Energy Index rose to the 150 level when the Iranian terrorist general was killed, and a war premium was added to stocks. With the virus case explosion crude prices retreated and the Index fell to the 130 level as of last Friday. We see downside to the 115-120 level (Chart #16) depending upon the severity of upcoming news from China. If the economy in China recovers in 2H/20 and OPEC does a good job of managing crude inventories, then our price target being consistently over US$75/b with spikes into the US$80s would be possible. In this situation our 200 target for the S&P/TSX Energy Index could be seen later this year. This would provide an upside of nearly 70% for the Index and, for higher beta growth names, the ability to see doubles or better. 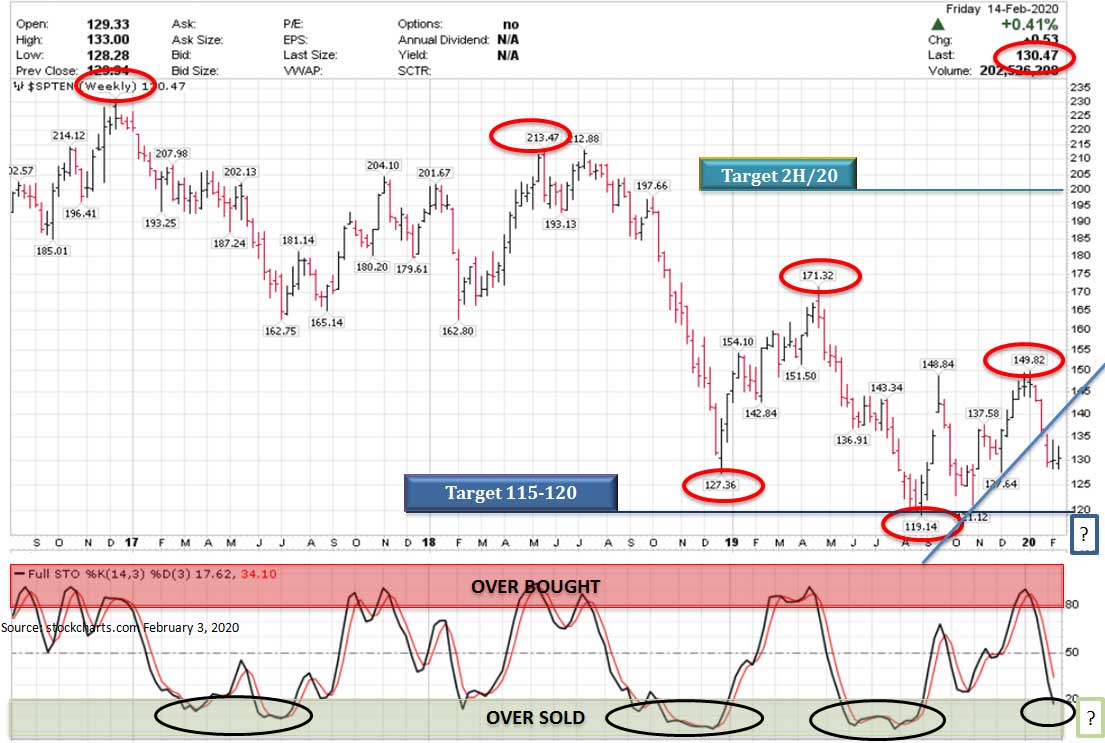 The most reliable indicator that we have used to give outright BUY and SELL signals for the energy area is the S&P Energy Bullish Percent Index. When it rises over 90% it is a sell as the investing world is loaded up big time and when it is ignored and hated it falls below 10% and is a wonderful contrarian BUY signal (see Chart #17). 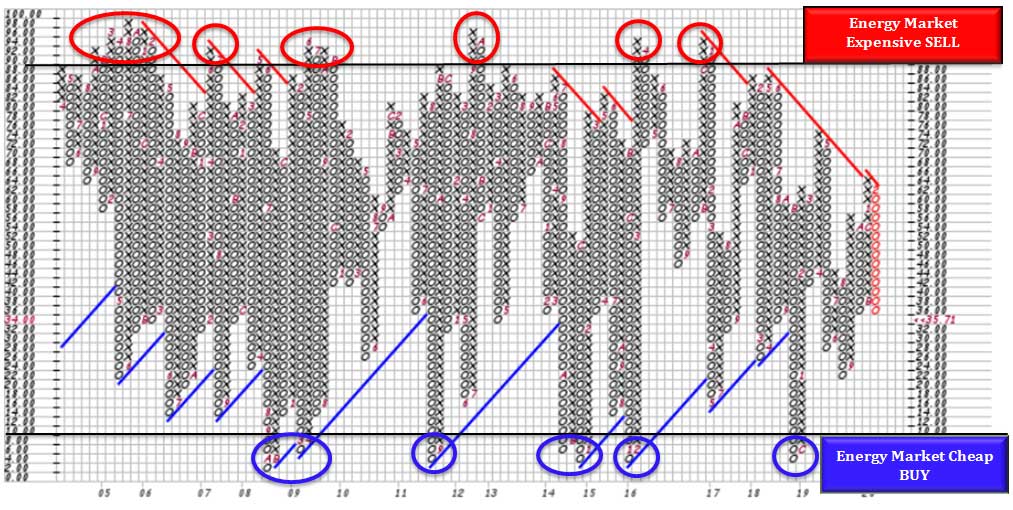 Showing this for crude oil over the time period since 2000 shows that the BUY signals are 100% reliable (Chart #18) but market tops can occur without the 90% plus signal (many times at just over 80% as in 2018). The last BUY signal was seen in late 2018 when we re-iterated our bullish view and added 15 more ideas to our Action Alert BUY list. The window for the decline below 5% took 7 weeks and the window to load up on stocks was a nice five weeks (Chart #19). 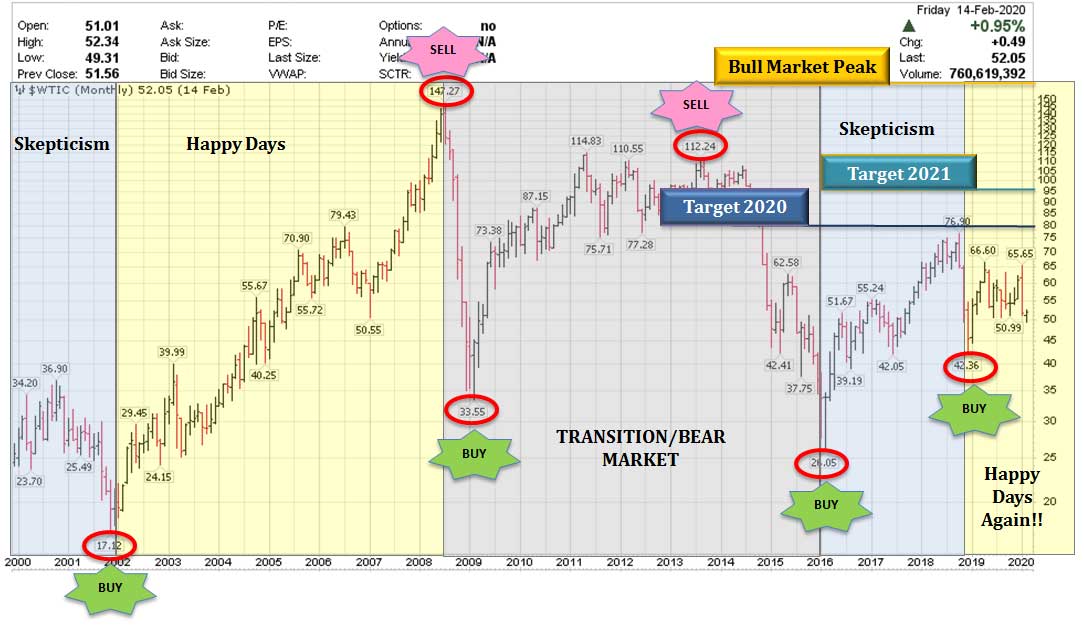 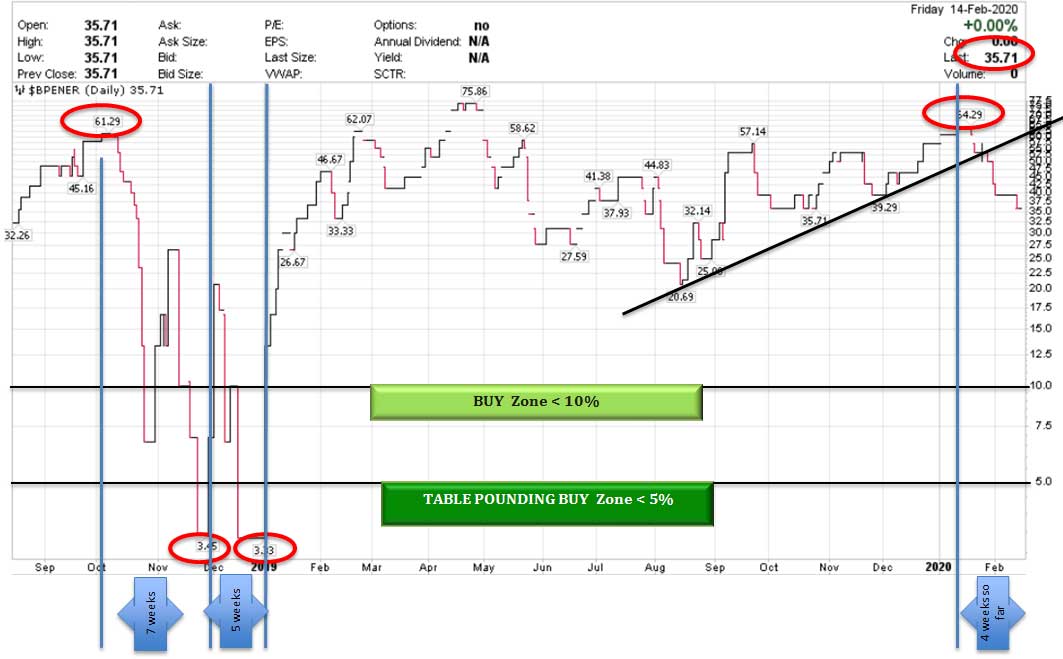 Going over the key BUY signals from 2000 to now, there were six signals and we await the seventh in the coming weeks. In Chart #20 we show the six signals and the level they were at before declining below 5%, the level they fell to and the decline period in weeks to the bottom. In addition we show the number of weeks that stocks stayed cheap to give investors the window to build their positions. Over the six signals the average decline period was seven weeks (range 7-15 weeks) and the average weeks below 10% at 2.3 weeks (range 1-5 weeks). From the recent high of 64% we have seen a decline to 36% so far in four weeks. I expect to see the Index drop below 10% (likely below 5%) in the next 3-6 weeks depending upon China’s virus issues and OPEC making the tough cutback decisions. The upside over the next few years is significant with the S&P/TSX Energy Index likely to rise to 200 later this year, to 340 in 2021 and above the 2008 high of 470 by 2024 or 2025 (Chart #21). 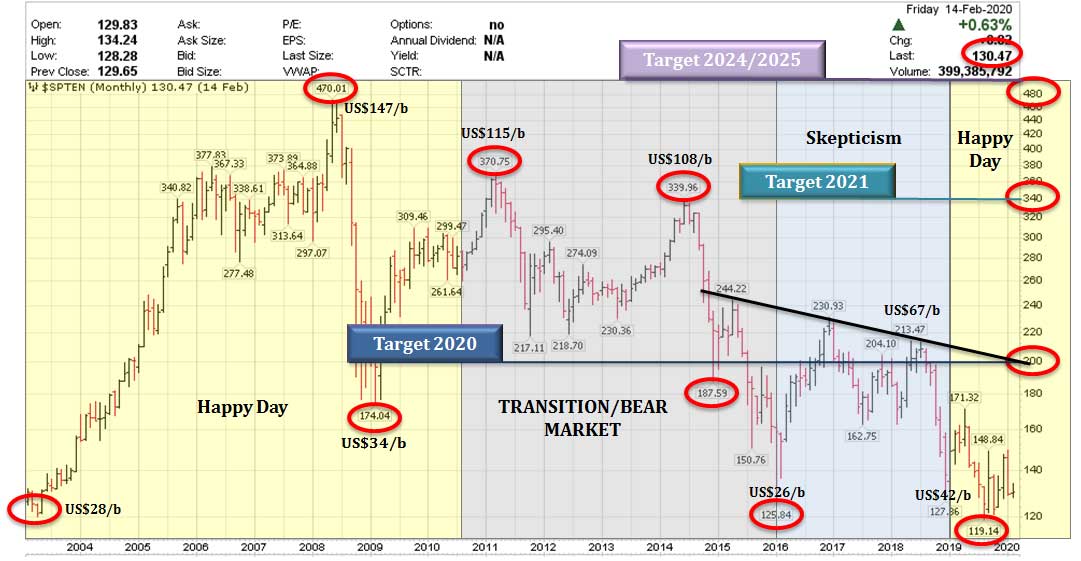