Why We Expect A Recession

The war in Europe and the sanctions imposed on Russia have exacerbated the inflation problem impacting the world. February CPI released last week for the US showed a rise of 0.8% (7.9% year over year), the highest level in 40 years (1982). Inflation pressure is across the board. It rose for energy, food, autos and shelter. According to a CNBC report last week, this takes US$3,500 out of the pockets of lower and middle class Americans, leaving them less to spend on other items. Wages did not keep pace. They fell in February by 0.8% (inflation adjusted) and for the year are down 2.6%. A very nasty squeeze. For the poor this is a very tough situation that is going to get worse as food inflation still has a long way to go and energy will not abate in price until the war in Ukraine is over and supply chain issues are resolved. The only panacea for this squeeze is a recession that cools off demand. With Central Banks now withdrawing liquidity and raising the price of money we see this as the most likely situation. The question is not if there will be a recession, but how quickly it will come and how severe it will be. A report from Italian statistics office highlighted a disturbing report on the inflation front as they saw January PPI rise by 32.9%

The commodity price spike we are seeing has occurred before. When economic conditions are strong, supplies are low and production can’t meet the growing demand, we see large increases in commodity prices. The last such instance was in 2008 (Chart #2). The S&P GSCI Commodity Index reached a high last week at 853 up from 509 in December 2021 and much above the March 2020 low of 218. In 2008, it spiked up to 894 in July from 387 at the beginning of 2007. As the financial crisis unfolded, the Index fell in seven months to 306. A repeat of this sharp reversal should occur as we see data supporting the recession unfolding.

The National Federation of Independent Business (NFIB) does regular surveys of their members. The recent poll on inflation shows a higher concern than in 2008 and is reaching upward to the level seen in the early 1980s (Chart#3). The overall Optimism Index (Chart #4) fell to 95.7 (survey forecast was for 97.3). It is heading down quickly and won’t take much economic weakness to take it below the pandemic low in Q1/20. 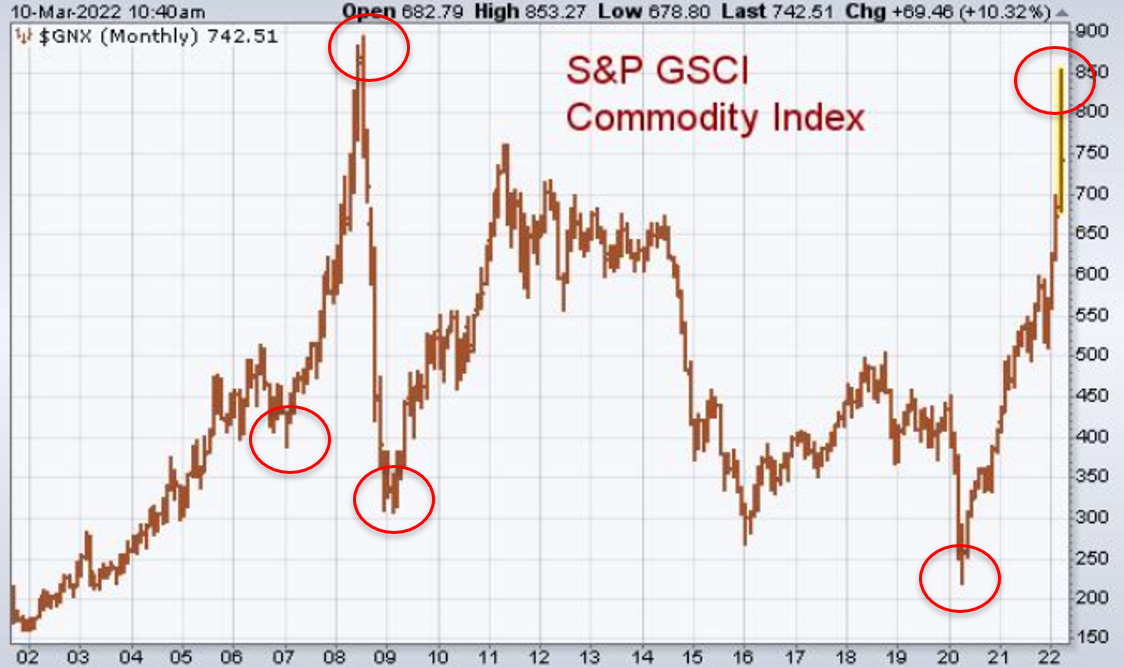 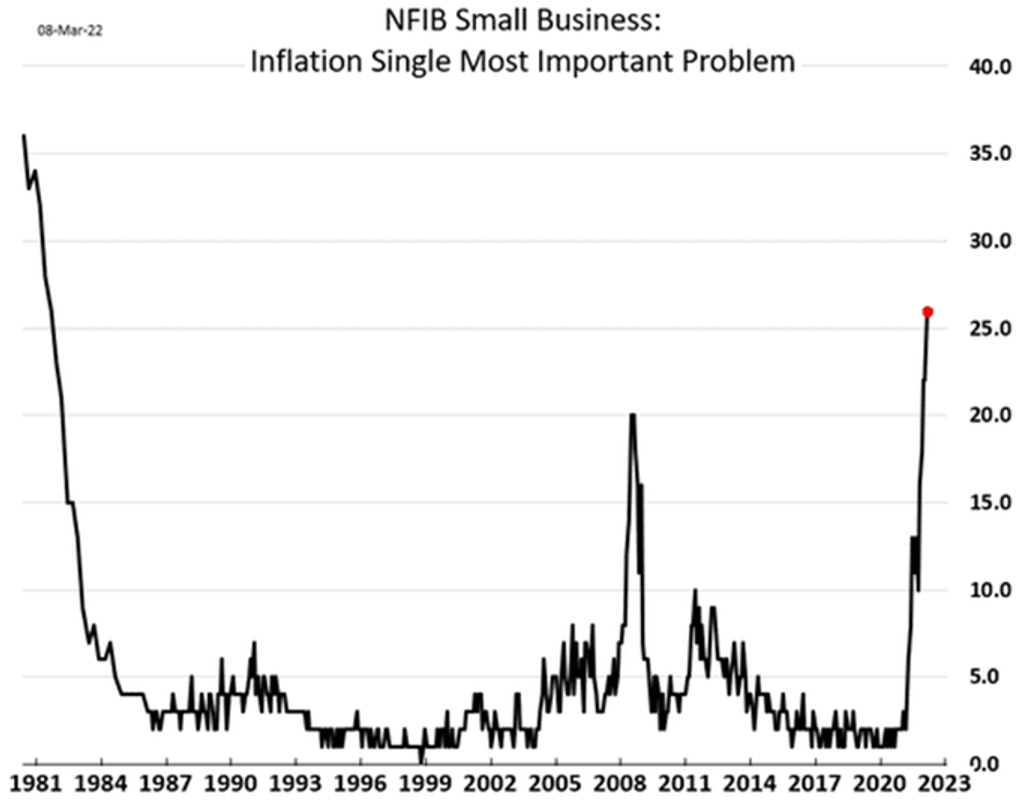 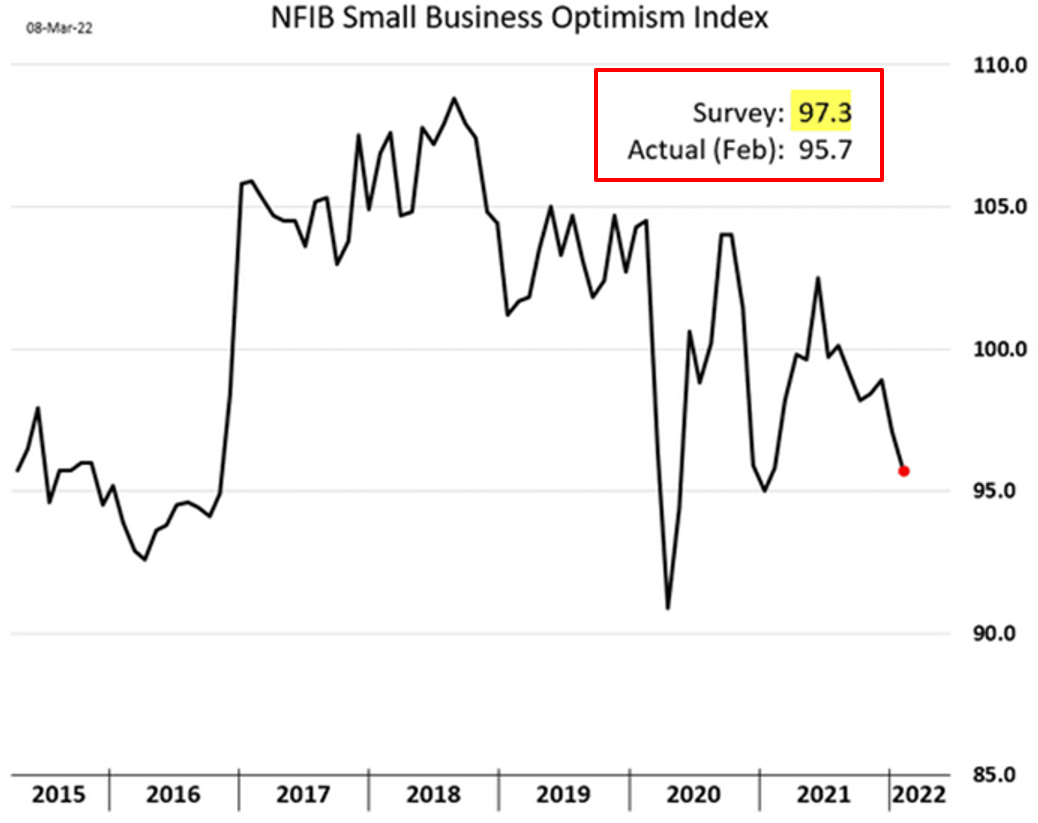 Inflation is rising and the Central Banks are feeling the pressure to rein in inflation while at the same time providing liquidity to keep economies growing. It is a tough balancing act. We expect that in the end they will have to focus on fighting inflation. The financial markets are making this happen by raising interest rates. One key measure bond investors watch is the spread between the US 2-year Treasury yield and the US 10-year Treasury yield. That spread was over 150 basis points last year and has now shrunk to 25 basis points (last Friday close). When it goes negative and we have a rate inversion, recession follows shortly thereafter. In Chart #5 we show this and the sharp decline that over the last few months, seems eerily like prior falls which led to recessions. The Fed met this week and raised interest rates 25 basis points and talked tougher about the inflation issue.

For most of us the inflation rise is most noticeable in the price of crude and how much it costs us to fill up our tanks with gasoline. A few months ago it may have cost $50-60 to fill up one’s tank and now the price nears $100. Last week we saw WTI spike to US$130/b. If the war in Ukraine gets worse and more sanctions are applied, then Russia could cut-off supplies of natural gas to Europe, spiking prices up much higher. One military expert mentioned that if Russia used WMDs, the price of crude could spike upward to US$180-$200/b. The impact of various spike prices on CPI can be seen in Chart #6. A spike to US$180/b would imply inflation at 10%. The Fed would have little choice but to drive the economy into recession, notwithstanding a US election year.

Recession Risk Rising As We Near Interest Rate Inversion 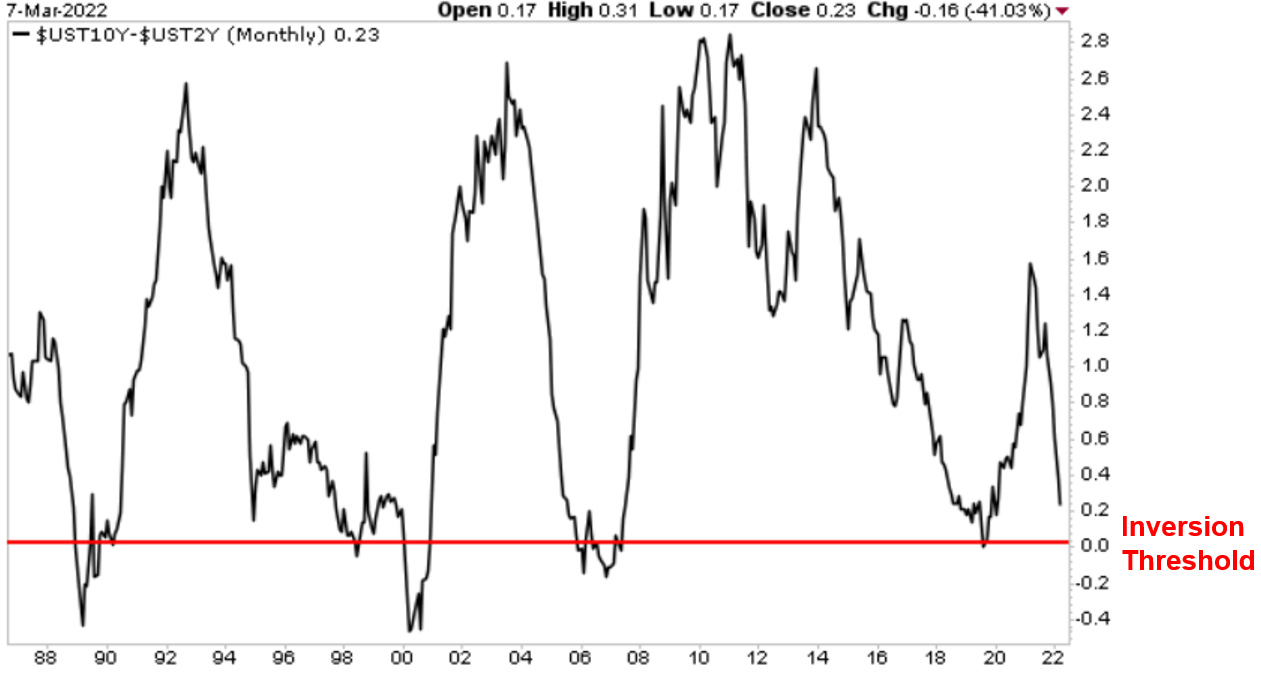 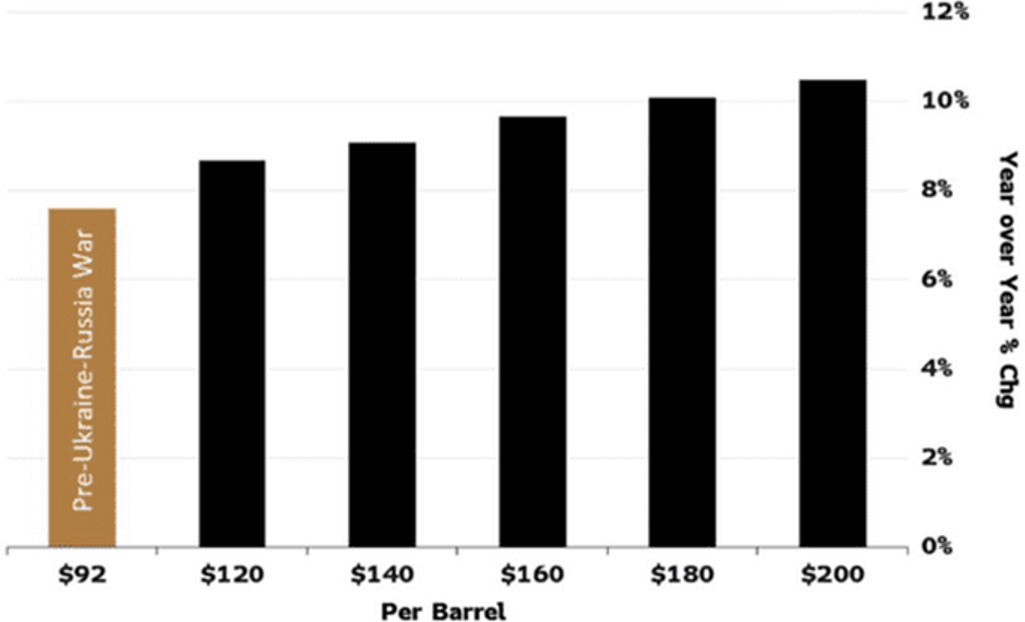 Food inflation is going to get worse as the bread basket for much of Europe and the Middle East is from Ukraine and Russia. The invasion has halted sea exports and ships are now stranded in ports under Russian control or where there is fierce fighting. As a result prices are spiking for the key foodstuffs grown in the region.

Wheat: Russia and Ukraine provide 29% of world wheat exports. Egypt is one of their largest customers and buys 60% from Russia and 25% of their needs from Ukraine. The price spike so far is reminiscent of what happened in 2008 (Chart #7). Prices have doubled since mid-2021. Egypt has been subsidizing bread for its citizens and will find it difficult to do so going forward. This could destabilize the country. Middle Eastern countries that were buying affordable wheat from Russia and Ukraine may now not be able to do so. Turkey, Iran, Egypt, Lebanon and Syria are the largest buyers in order of magnitude. Egypt with a large population could see severe problems feeding their people going forward. Syria might get help from their Russian sponsor but the others will be in a bind. Turkey is on the outs with Putin.

The global food supply problem does not end there. European livestock farmers are reliant on Ukraine for corn and other grain additives for animal feed. Ukraine last week banned all exports of food products in an effort to save its own citizens.

Brazil will be in a bind as they have been importing 46% (Economist report) of their potash from Russia and Belarus (which is not yet sanctioned).

Another grain, barley, is produced in both countries and they provide 28% of world exports (Chart #8). The area also provides much of the world’s sunflower oil.

Russia provides 40% of the global palladium used for catalytic converters to curb emissions. The price has nearly doubled to US$3,525 from US$1,531 in December 2021 (Chart #9). The loss of Russia’s exports will surely add to supply chain problems for the world auto industry.

Lastly on the inflation problem and recessions, is a chart on crude oil and its price spike impacts (Chart #10). Every recession since the early 1970s has been a result of crude prices spiking over 50% from the prior year. There have been six prior incidences and now we are having the seventh. 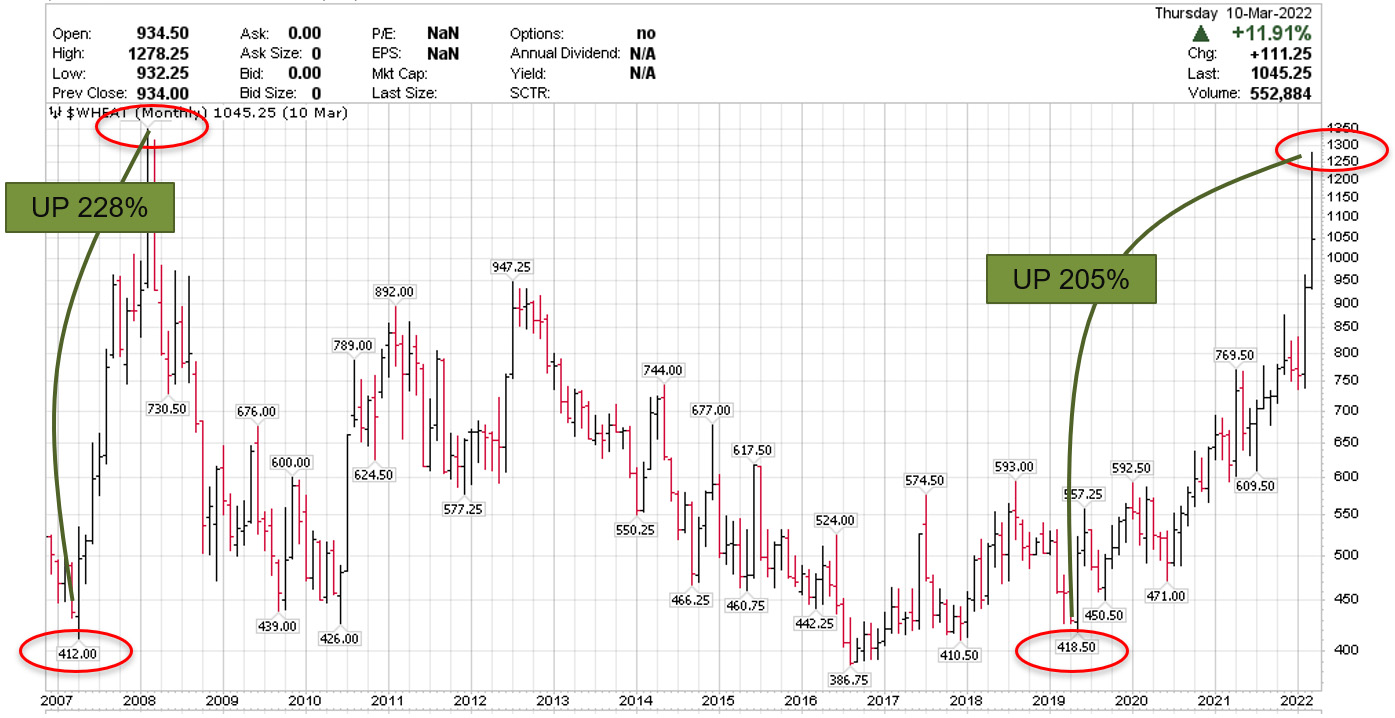 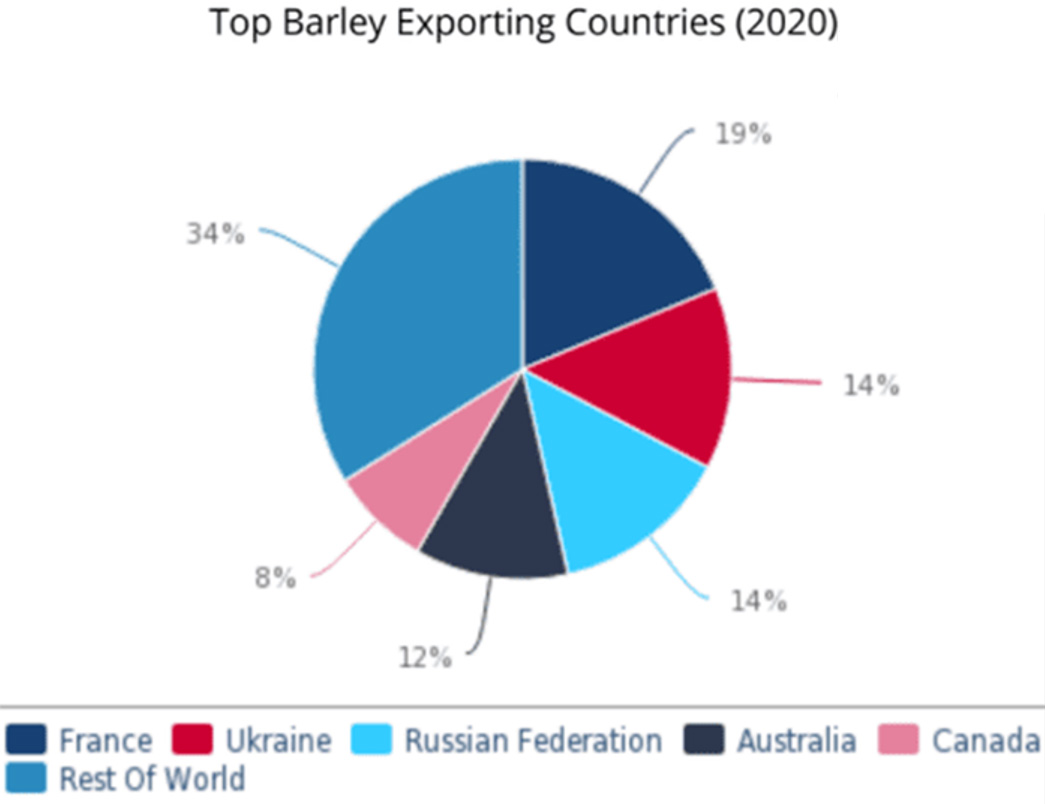 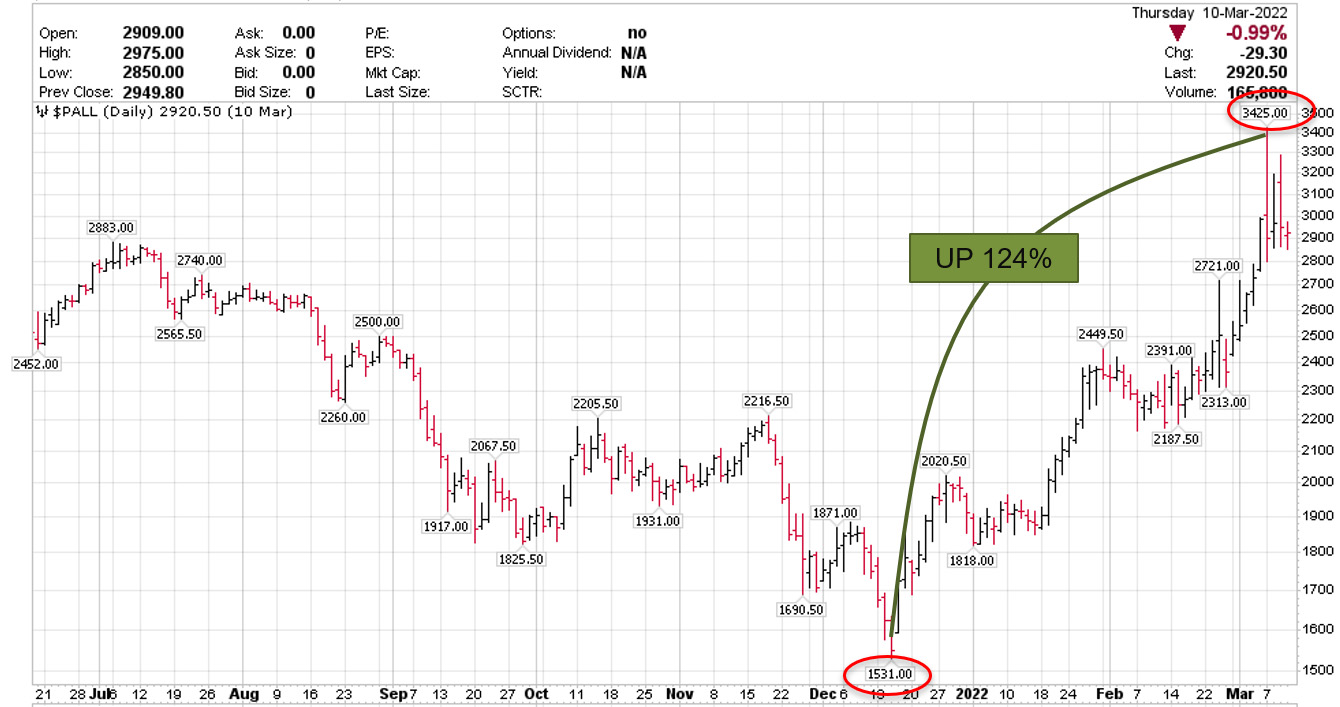 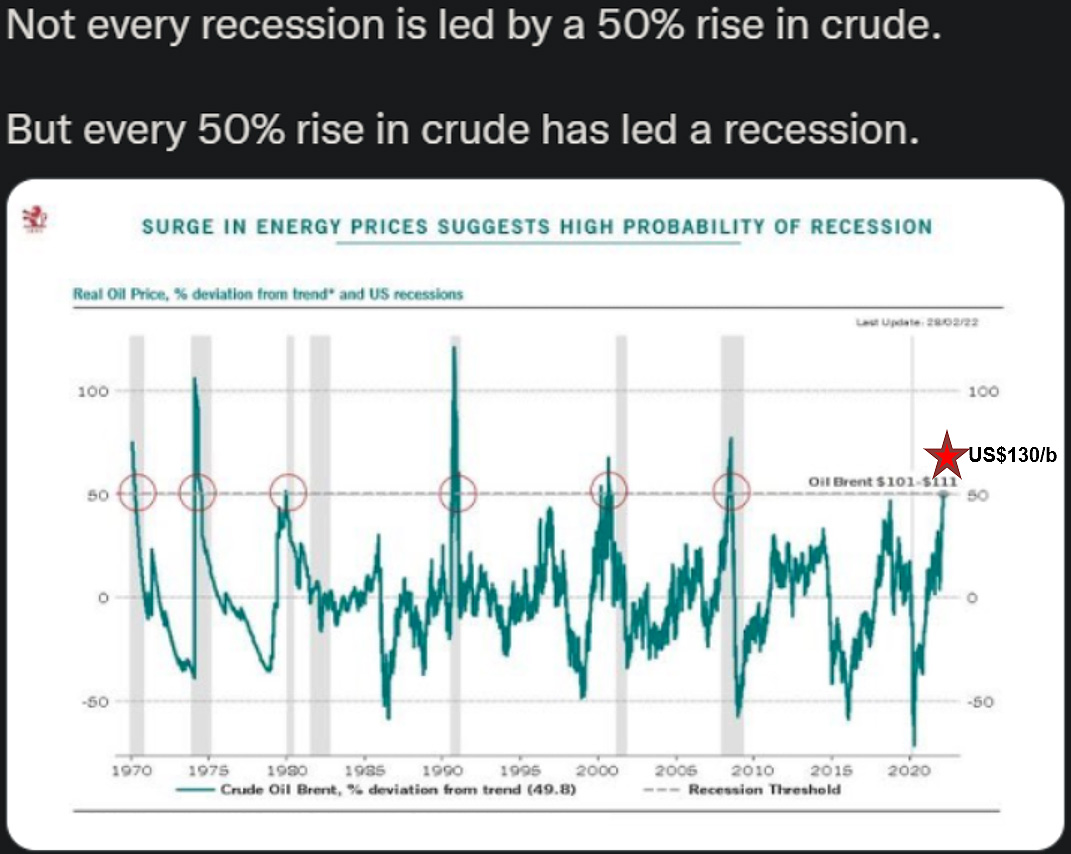 Just as it occurred in 2008, the world and the stock market were rosy and all was well with the world until it wasn’t. The underlying issues that caused the financial crisis of 2008-2009 were evident much before by those who were watching; the bank failures in Ireland and Iceland, the junk bond non-payments and bankruptcies, the large amounts of NINJA loans (no income and no job loans) and the sub-prime mortgage tsunami which then forced the takeover of Bear Stearns by JP Morgan and ultimately the failure of Lehman Bros. There was no rescue for them. Then the crash occurred and Central banks needed to come to the rescue with quantitative easing and loans to the risk takers. Wall Street was saved but Main Street was left to find their own way.

We are facing a worse situation this time: 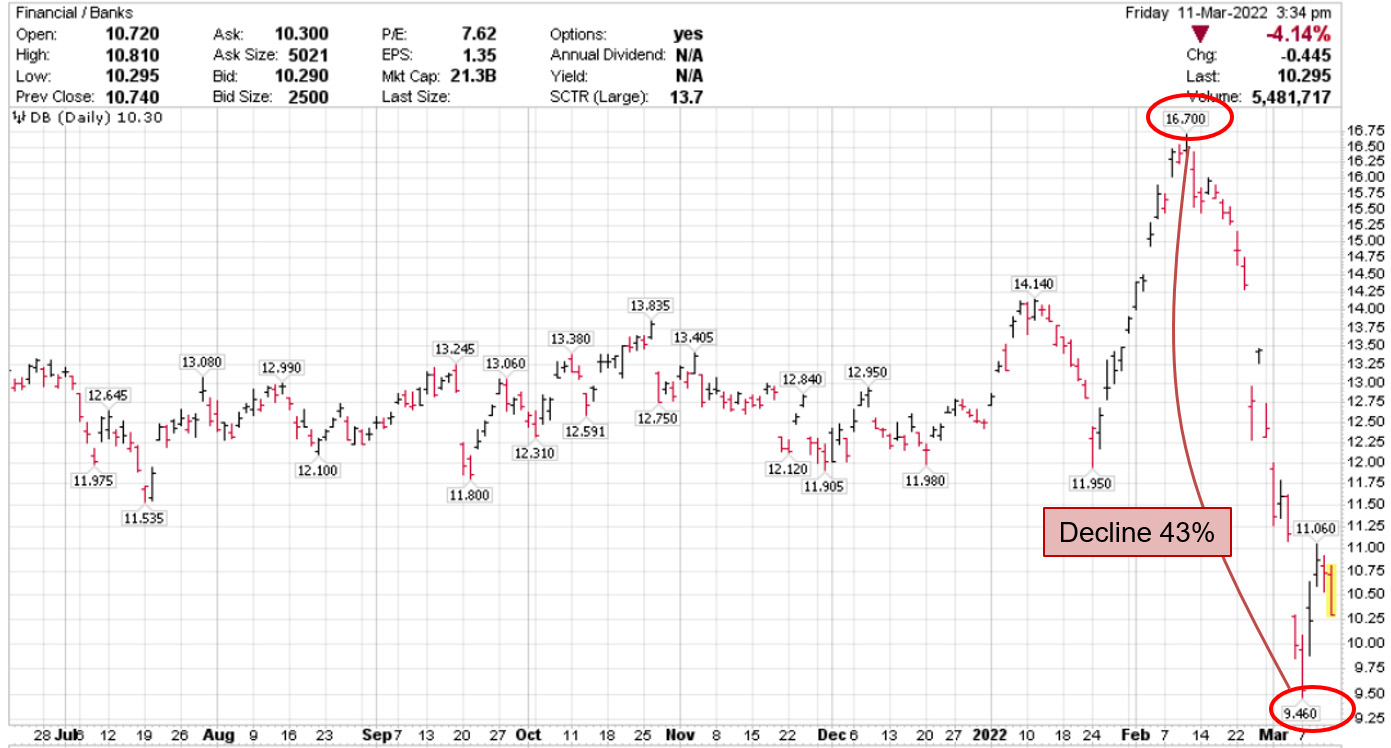 A few cartoons that we thought relevant to the current challenges: 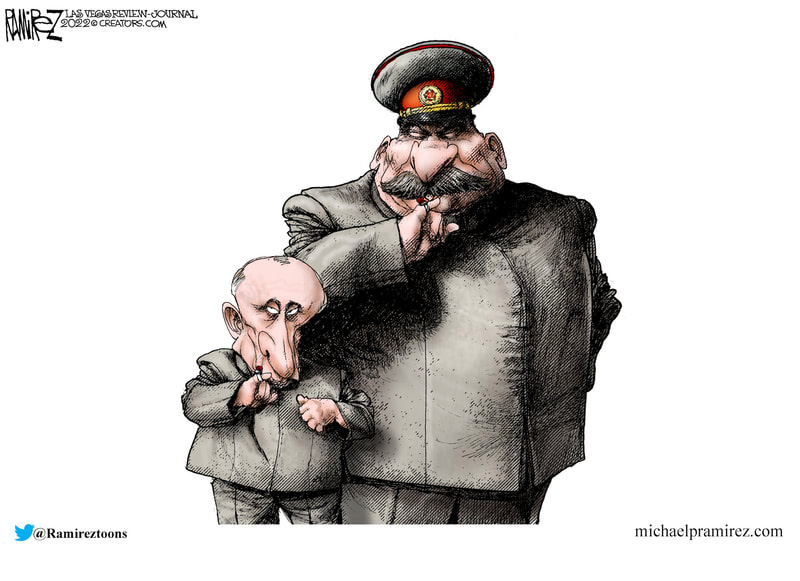 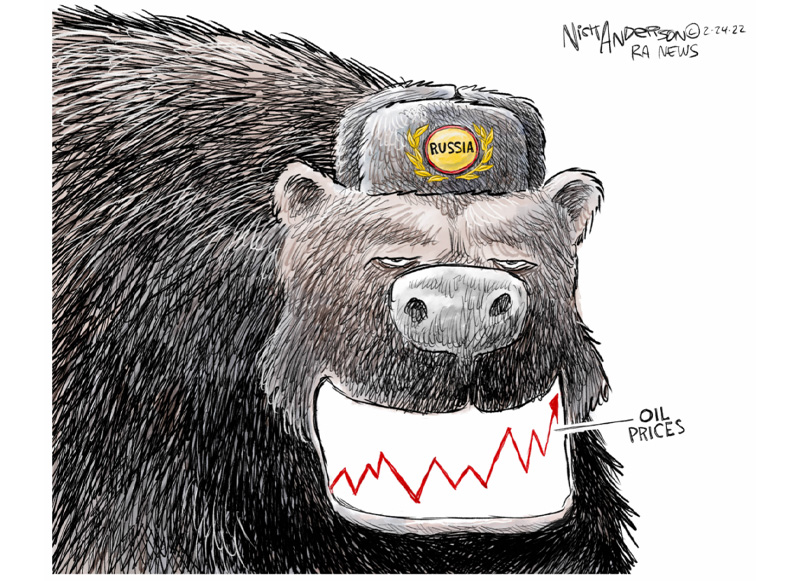 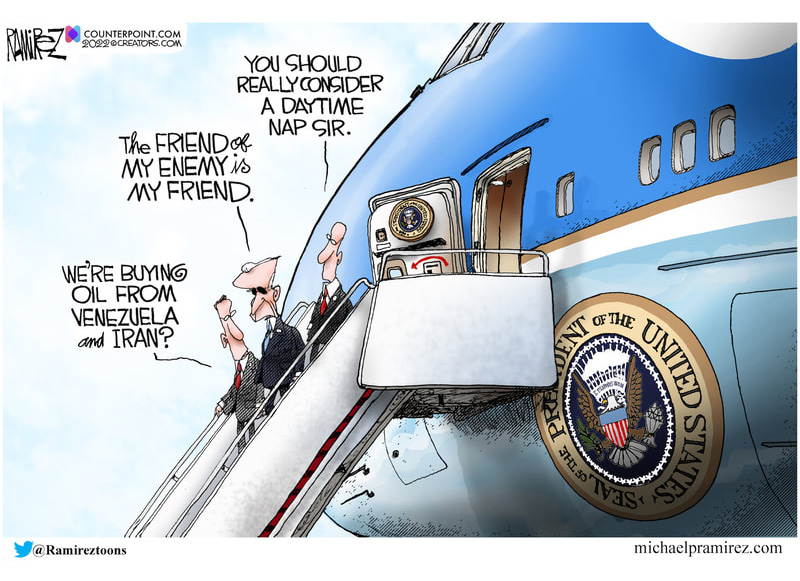 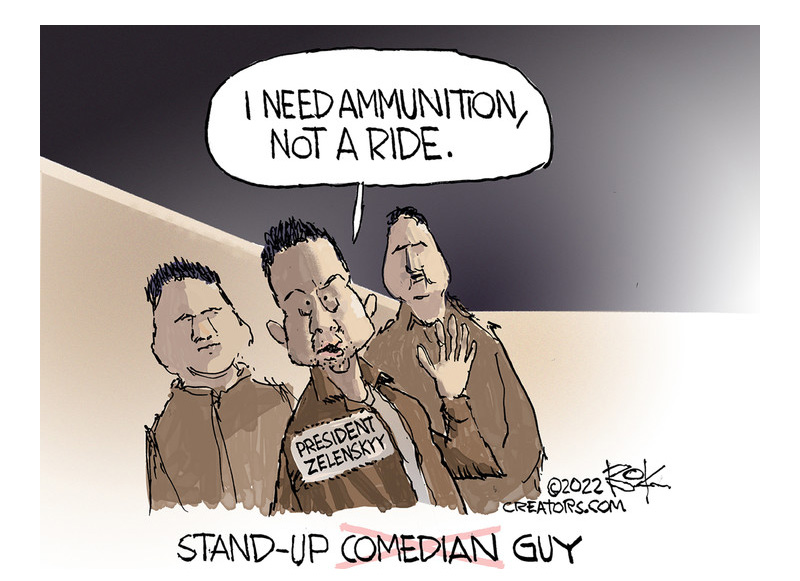 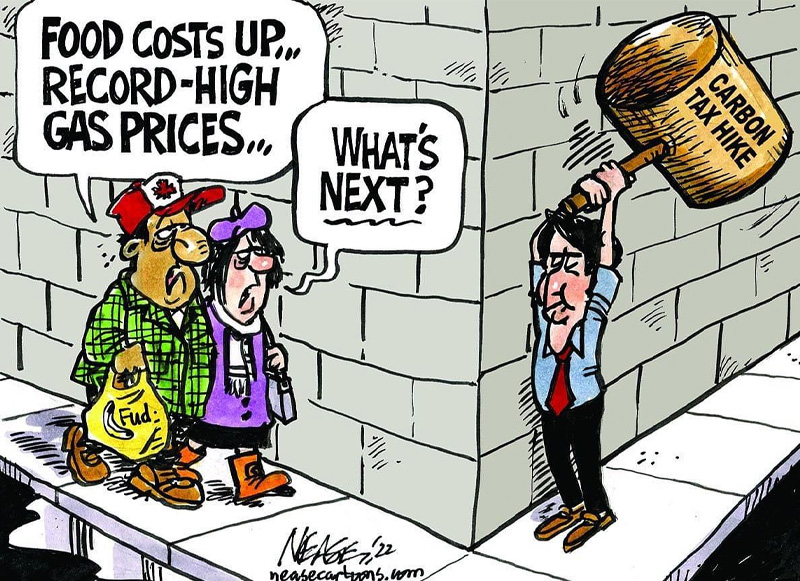