Inflation pressure is getting worse around the world and is pressuring household budgets as costs are rising much faster than wage rates. The squeeze is coming from food, energy and shelter cost increases. Protests against rising prices and the inability to feed ones’ family is disrupting many third world countries particularly. There are already violent protests in Athens, Sri Lanka and Peru and this may be the tip of the iceberg. The World Bank and the IMF are working to prevent debt and food shortage crises in El Salvador, Ethiopia, Pakistan, Sri Lanka and Tunisia. There is growing concern that over 1B people may face food shortages this year.

The sharp 11.2% rise in the US March PPI was a shock to US investors and interest rates took off. The Two-year US Treasury yield has rocketed upward from 1.3% in early March to 2.72% last week and is up 20x from the lows around 0.13% a year ago (Chart #6). This is the sharpest percent increase in such as short time ever. Yes, the rate is still low in absolute terms but the increase can be painful for mortgage renewals etc. The Five-year US Treasury rate is now at 2.94% and is above the 10-year rate which is at 2.90%, causing an inversion in the rate structure which has always preceded recessions.

In some countries the inflation data is a remembrance of the runaway inflation of Zimbabwe, Venezuela, Argentina and Turkey which destabilized the countries and led to even more autocratic regimes.

In Portugal, the PPI year over year rose to 26.3% in March (Chart #7). This is higher than the rate in 2008 before the financial crisis. After that unfolded the rate plunged to nearly a negative 20%.

In Denmark, the PPI year over year for March rose a whopping 35.1% (Chart #8). This again was much higher than the inflation rate in 2008 (and a faster rise in such a short time period) before the world went into the financial tailspin. Note how quickly the financial crisis lowered the rate to a negative 16%.

Germany is facing a substantial fall off in business activity (Chart #9). From a high of 83 in mid-2021 the last two months have seen a waterfall decline from 55 to minus 41. It is nearing the low during the worst of the pandemic. If Germany agrees to cut off supplies of Russian crude then the economy will decline into a much worse position than during the pandemic lockdowns. 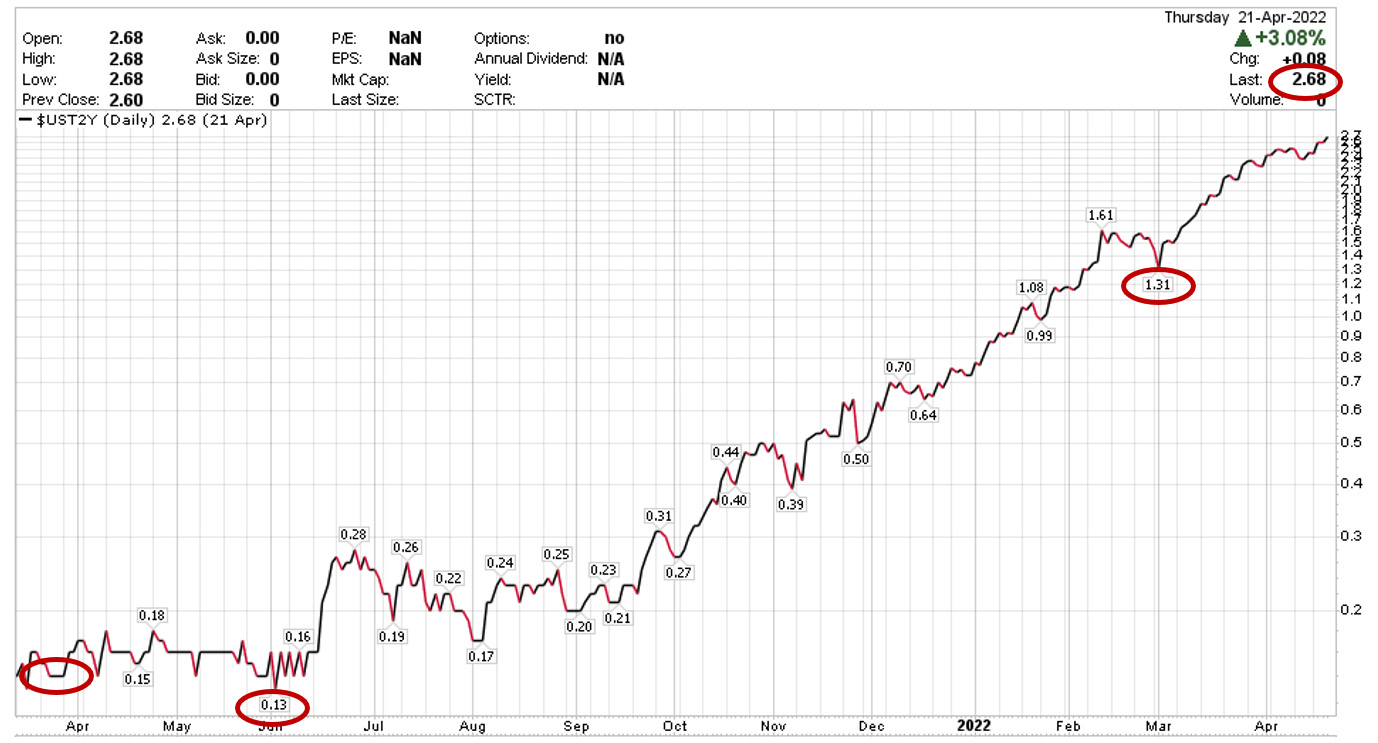 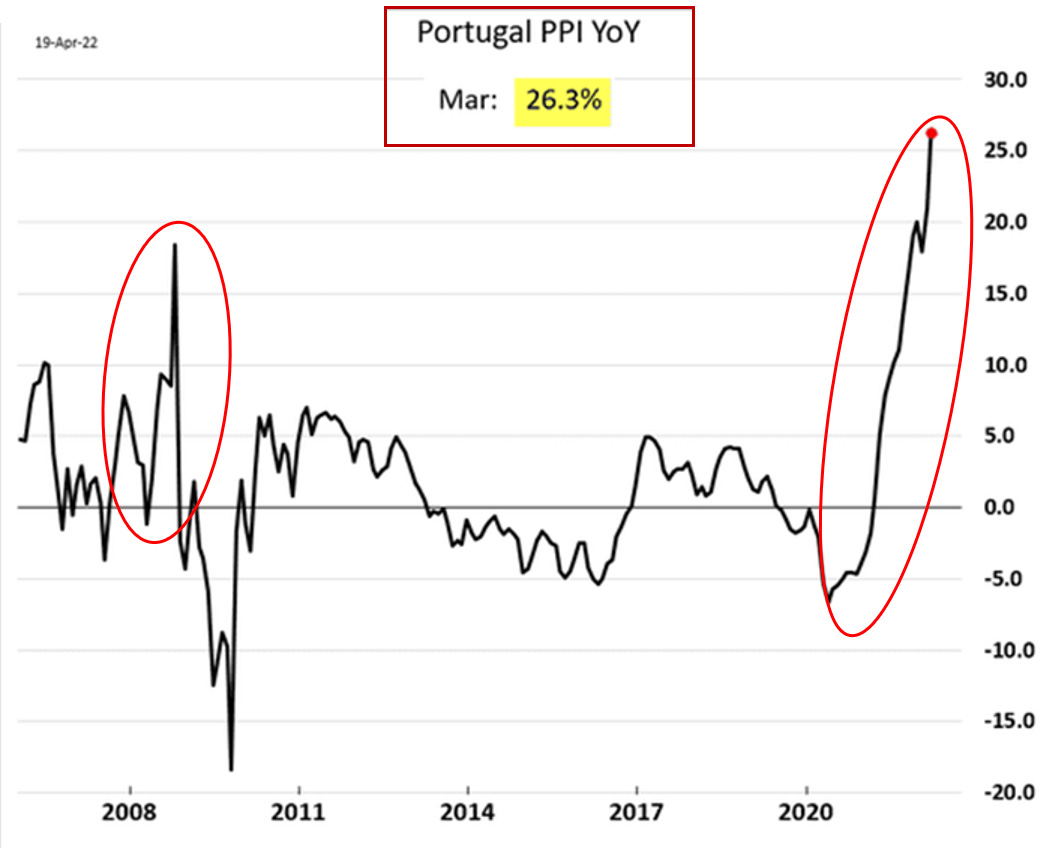 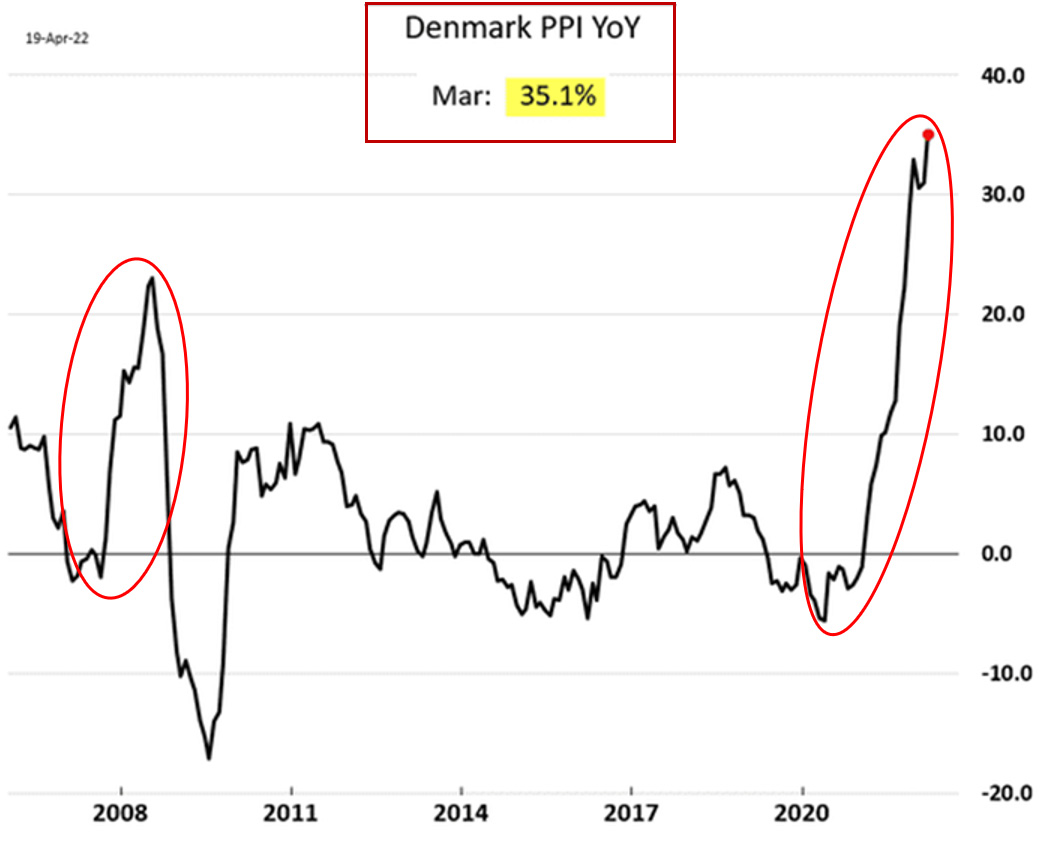 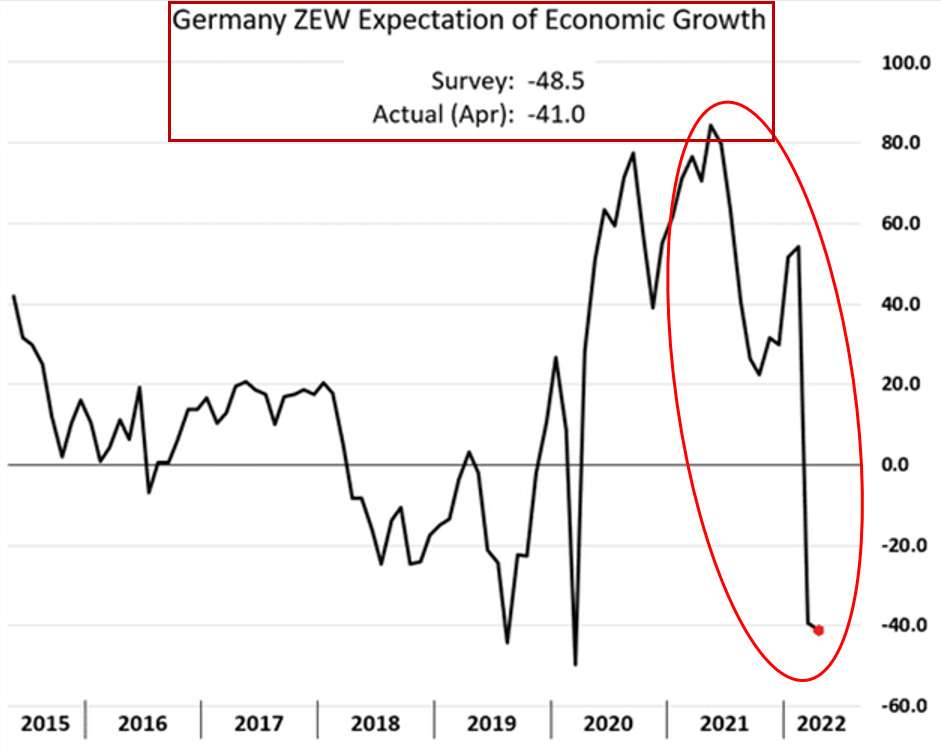 China is facing the worst phase of the pandemic with the shutdown of many of the major cities on the east coast. Over 20% of their GDP is affected. The reason is the low level of vaccinations and the aggressive lockdowns that have been imposed. People in lockdown are not able to leave their homes except to be tested and food shortages are causing civil disorder in many cities, especially in Shanghai a city of 26M people. The Chinese authorities are focusing on containing the pandemic and not caring about the needs of the people or the economic fallout.

Retail sales across the country are now negative. In March overall retail sales fell 3.5% and are falling quite fast. The decline is more pronounced than when the pandemic first hit in early 2020 (Chart #10). With Shanghai in lockdown the usage of trucks is down to 20% of normal levels (Chart #11). This has impacted the local stock market with the Shanghai Composite down 19% from its September 2021 high (Chart #12). Worse off is Hong Kong with the pandemic case load rising and the economy under duress from the lockdowns. The Hang Seng Index is down 41% from its February 2021 high of 31,200 to a low last month of 18,235 (Chart #13). 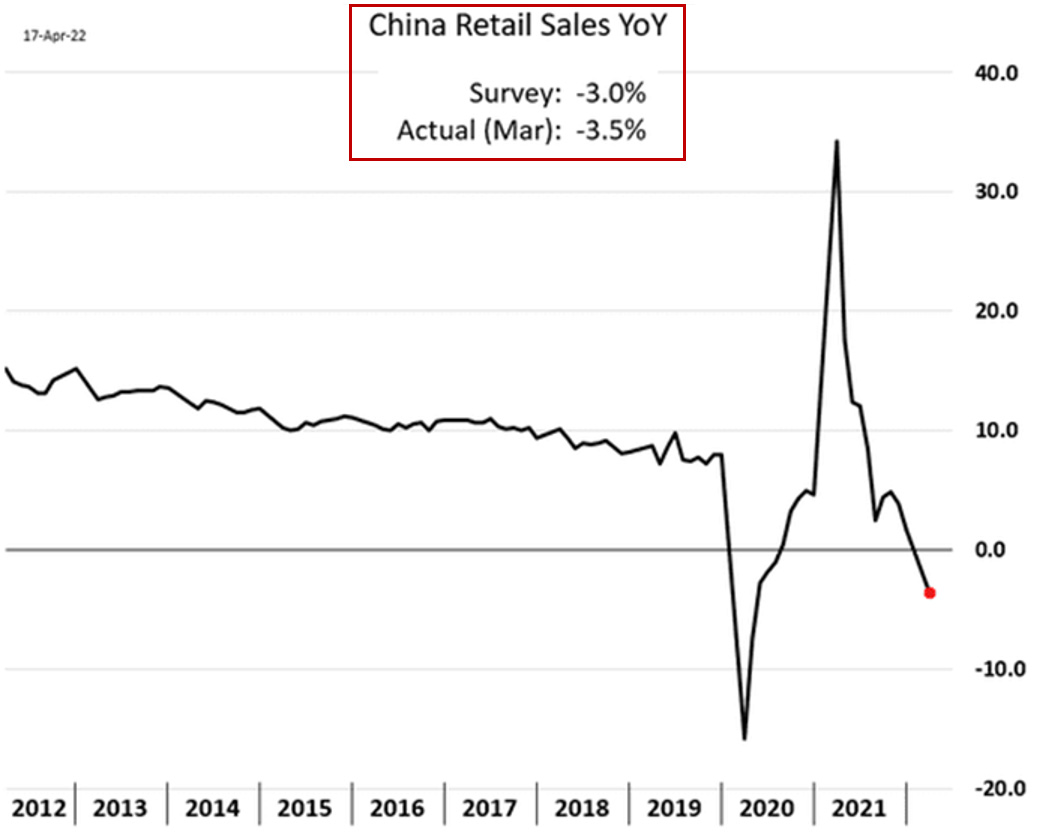 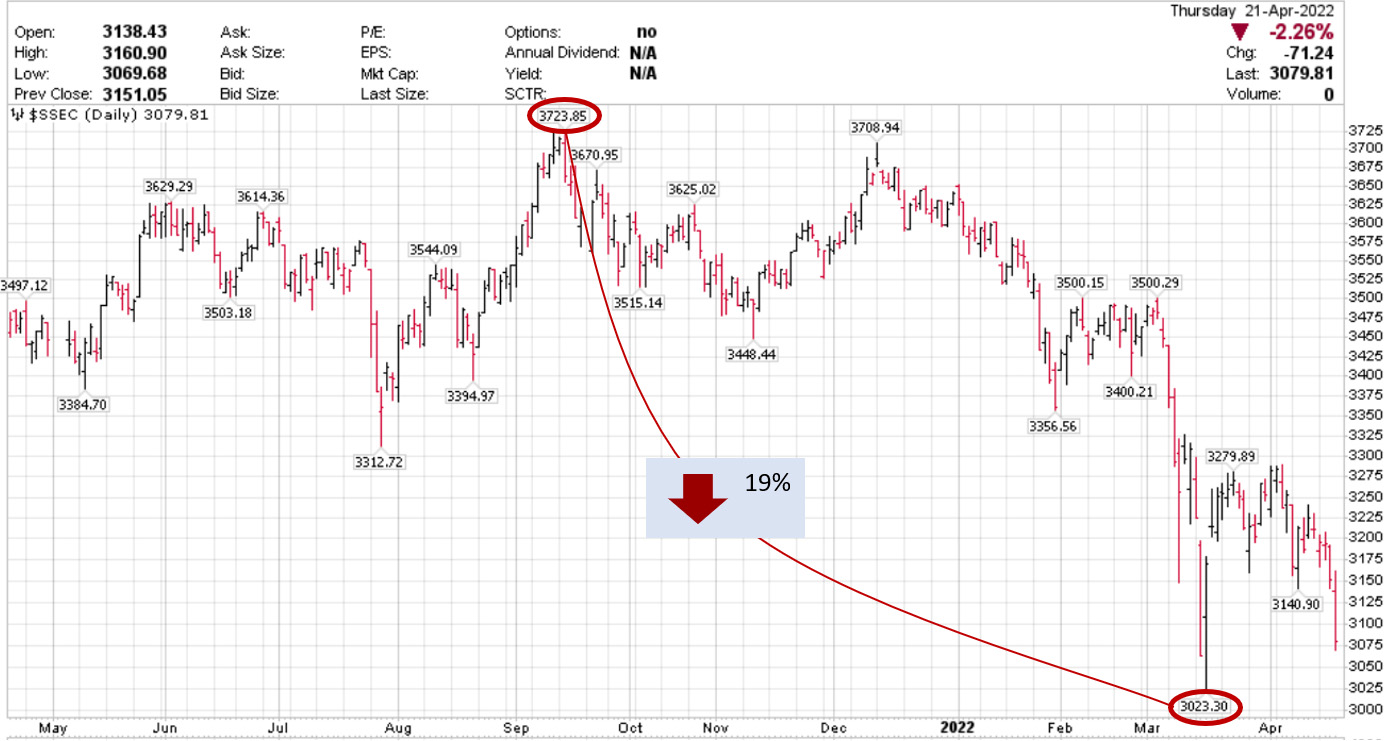 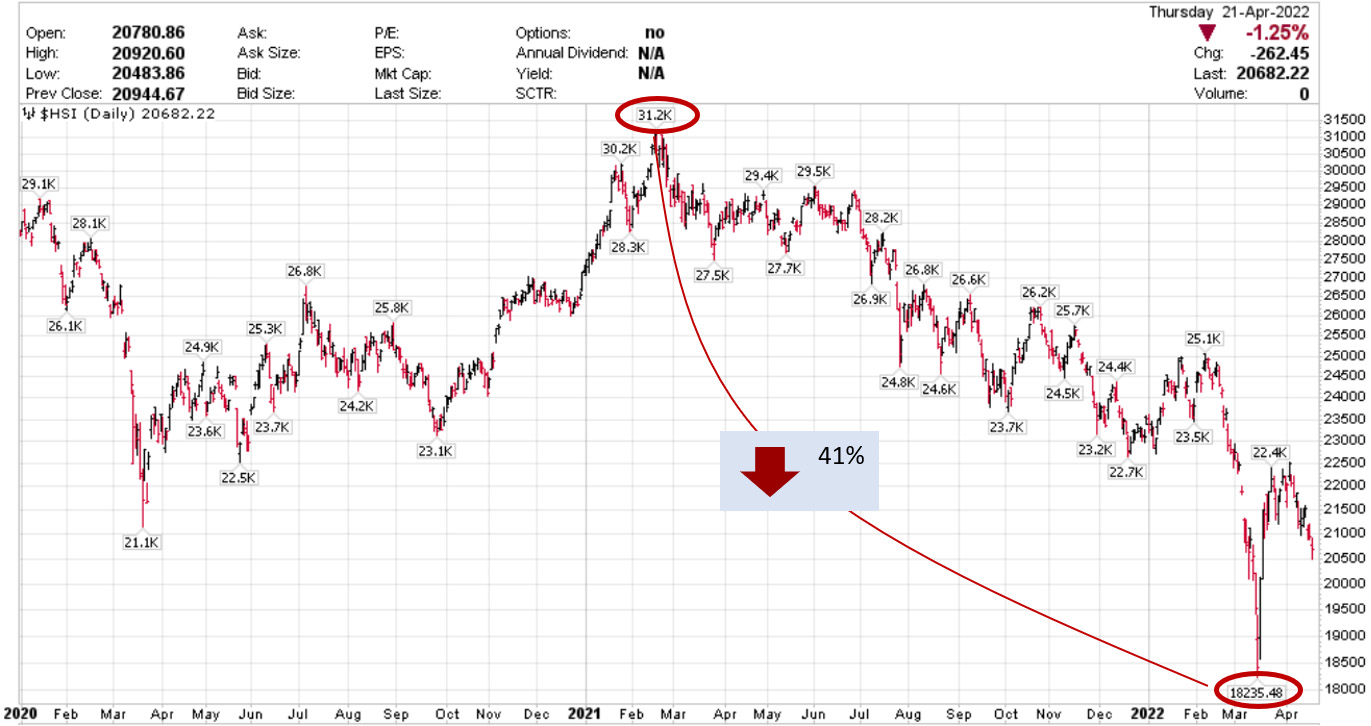 The rapid rise in energy has moved through the supply chain and prices at the consumer level reflect this sharp price increase. If crude prices stay at current levels (over US$100/b) this will not lift inflation levels any further. It will be painful at the pump but it’s already impacting consumer wallets.

One area with price increases that has yet to fully hit consumers is the rapid rise in grain prices. With Ukraine, the bread basket of Europe, not able to export and likely not able to plant this year, the impact to consumers on their food supply has yet to be felt.

Some poor countries’ governments have been subsidizing bread prices to provide nourishment to their populations. If they cannot afford the cost of grain as the prices skyrocket they may face civil disobedience. One such country, Egypt, is seeing prices up 44% in just the month of March versus February and overall prices are up more than double from a year ago (Chart #14).

These increases have not yet fully been passed through the food chain. The prices we are paying now reflect commodity purchases of months ago, so more food inflation is on the horizon. 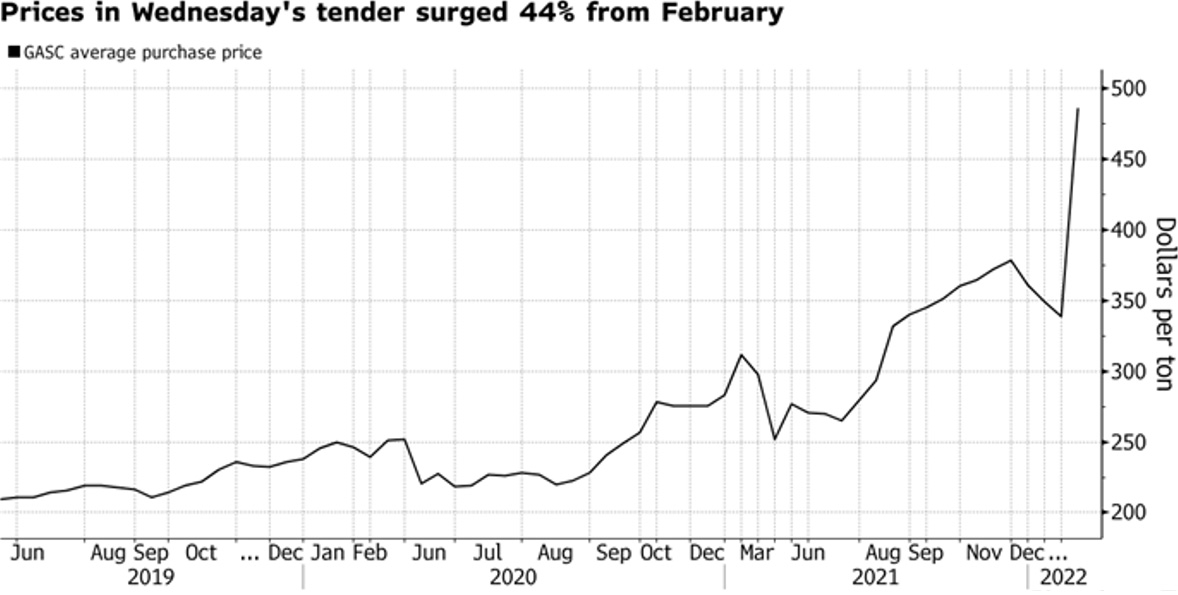 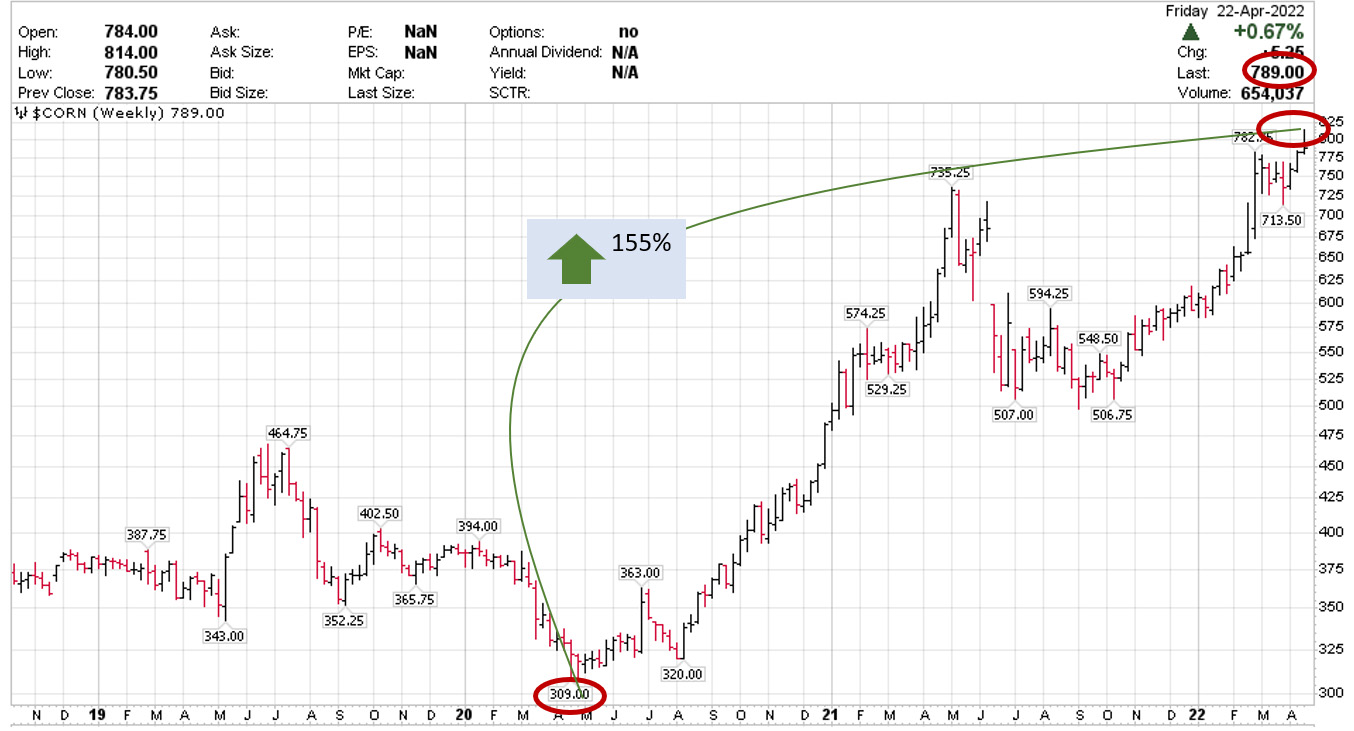 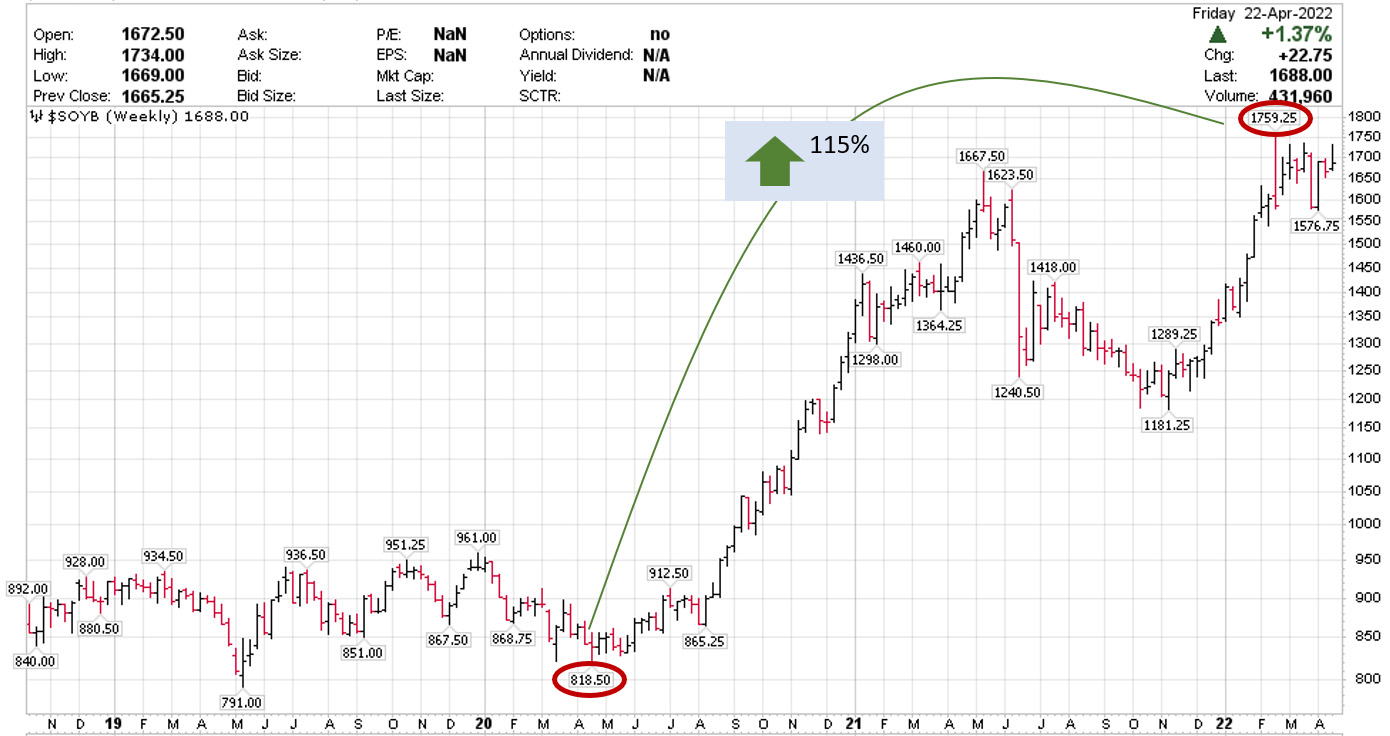 The challenge for consumers is that real wages are not rising, but falling, so that household after tax income cannot cover the rising costs of consumables. In the US, real wages rose into 2020 due to a distortion of low wage employee layoffs but in the last quarter with record lows in unemployment, workers are facing a margin squeeze. For low and middle income Americans this is particularly painful (Chart #17).

Businesses are feeling the pinch and have little ability to pass through rising costs. This year, the business outlook by the NFIB is worse than in 2008-2009 (the financial crisis) and worse than the pandemic (Q1/20). The sharp falloff highlights that small businesses will not be hiring or spending money to grow but will be focusing on surviving for some time (Chart #18).

So we expect a period of weaker economic activity ahead and for corporate earnings to suffer. With many companies’ stocks quite overvalued, any miss on earnings or their outlook will result in the stock getting thrashed. The Netflix results highlight this situation. The next few weeks will see the bulk of Q1/22 earnings results and so far there have been quite a few misses and stock routs. If this continues we should see periods of significant stock market decay followed by sharp bear market rallies. It is likely we may see a recurrence of the market action in 2007-2009 (Chart #20). The S&P 500 fell from a high of 1,576 to a low of 667 or down 57%, with rallies along the way ranging from 7% to 24%. This wild ride is just starting now. From a high of 4,819 on day two of trading in 2022, the Index has fallen to a low of 4,115 or down 15% and bounced (in a bear market rally) to 4,637 in late March but now is descending again. We see downside to 3,700 as an easy downside target for a decline of 23% at a minimum. It is possible if the markets get really frightful that the downside could be to the 3,400 level for a decline of nearly 30% from the January 2022 high. All of this could happen over the next 4-6 months. 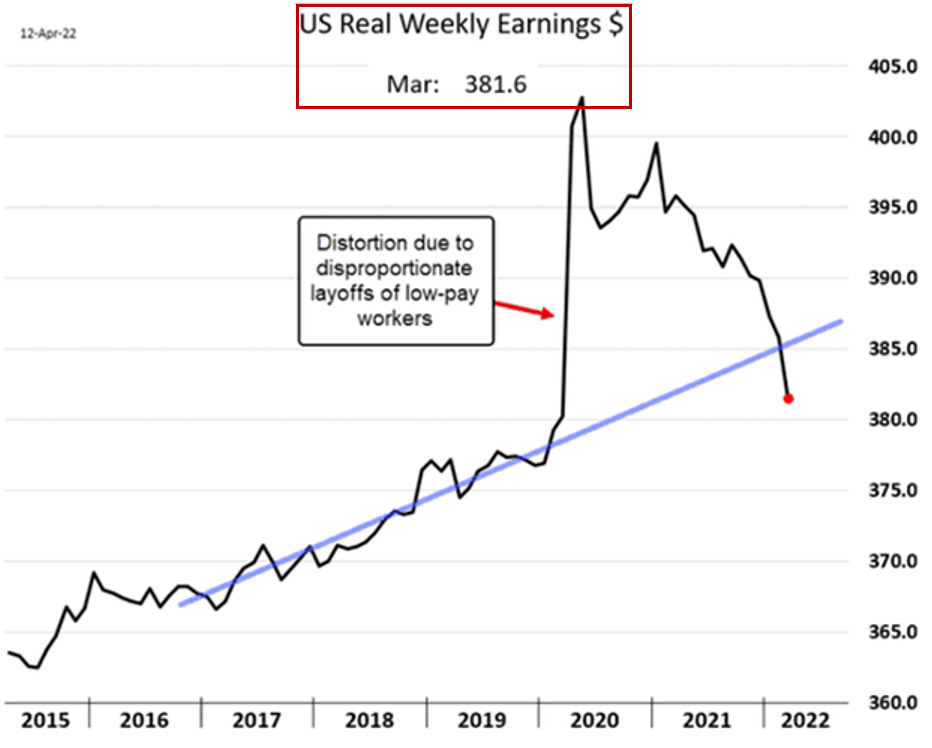 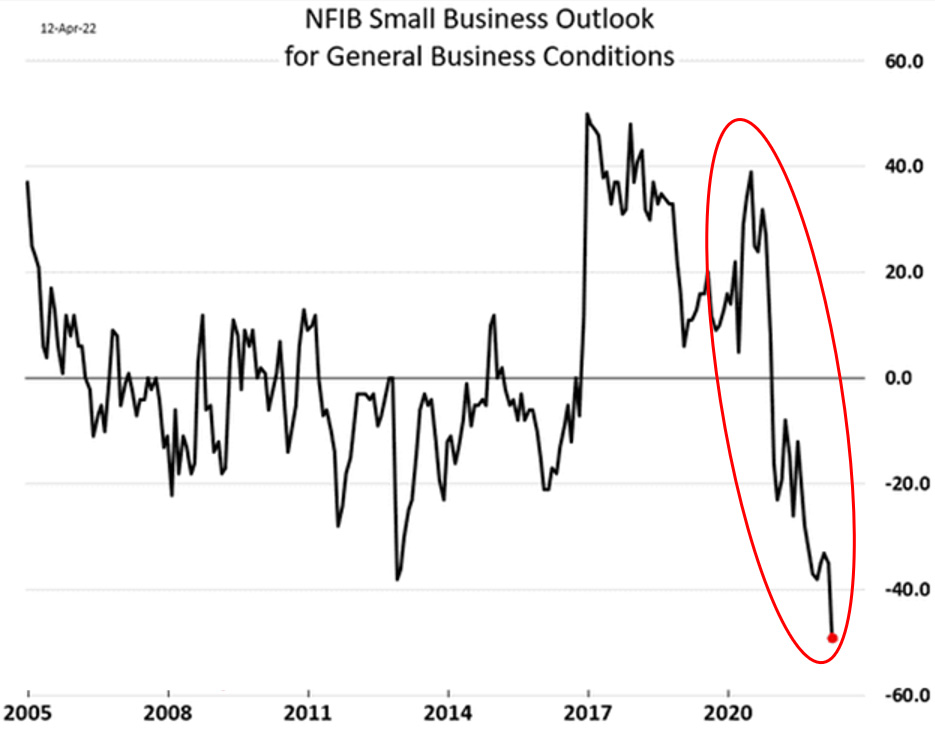 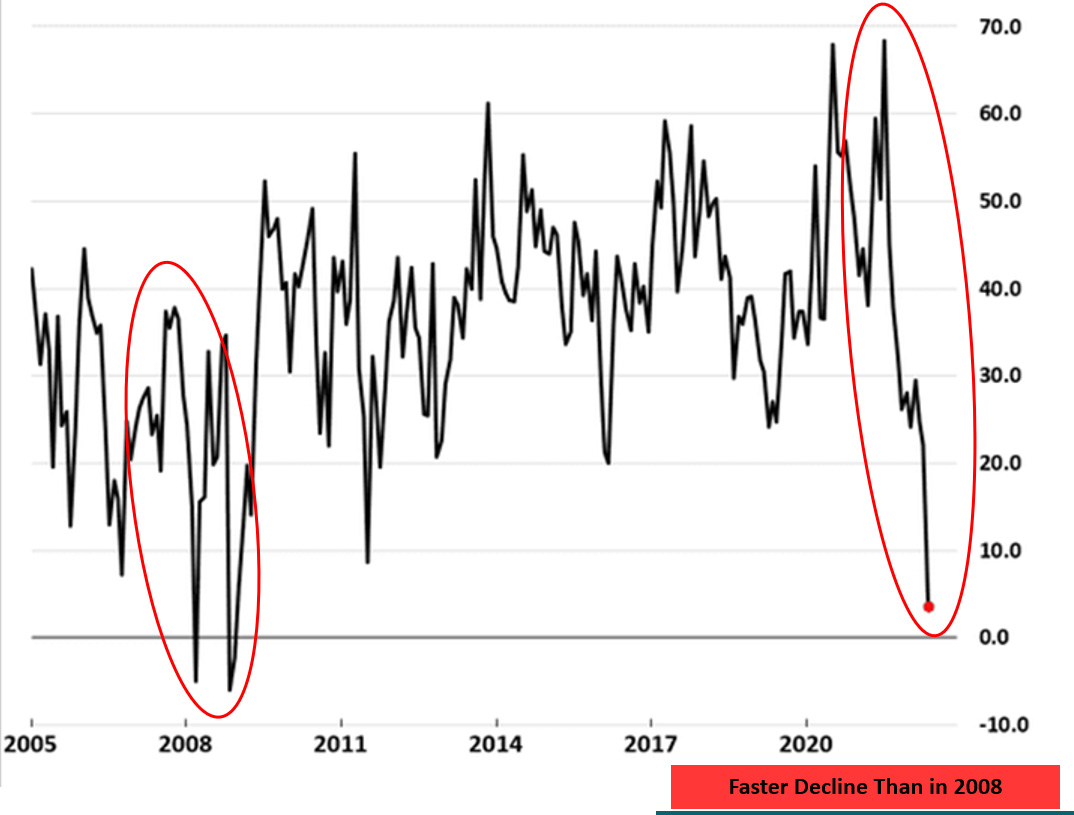 Bear Market Rallies – What To Expect 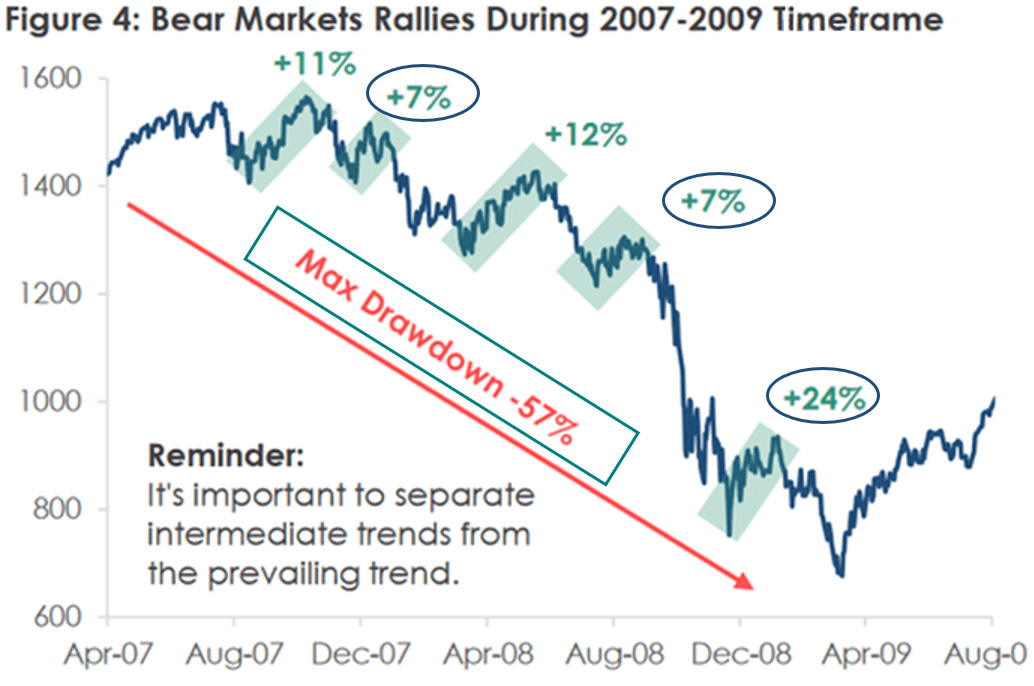 In our April Interim Report we discussed how the semiconductor industry, which has fabulous fundamentals, was being impacted by the general malaise in the tech sector and the falling NASDAQ. The semi industry has very strong pricing power to increase margins, has high and expensive barriers to entry, is seeing massive shortages (auto industry particularly hurt) and long lead times to bring on new production. Revenues, EBITDA and Net Income are all heading higher and yet the stocks are retreating.

A bit of a recap for two of the most high profile names:

Advanced Micro Devices (AMD): In our April 8th Interim Report we noted that the stock had fallen from a high of US$164.46 per share when the NASDAQ peaked in November 2021 to US$99.35 per share, the low in late January 2022 (Chart #21). We said at that time that the bear market bounce had lifted the stock to US$125.67 per share and when we saw a breach of the low of US$99.35 per share, we warned that there was substantial downside risk with targets of US$70-75 and maybe down to US$50 per share. Updating the chart last Friday and we see the stock has breached the US$99.35 per share level and had fallen to US$88.14 per share (Chart #22). Our target of US$70-75 looks very likely as the NASDAQ appears to have 2,000 more points of downside.

With the wonderful fundamentals for the semi sector and the pricing power that they control on their own, the fact that they are unable to hold off market erosion highlights that no sector can stand alone when the stock markets retreat or plunge. Energy has held up well so far, as the fundamentals are strong and the fear of more sanctions against Russia give the bulls their Red Bull or Monster Energy high. When the market and these energy high investors get off their stimulant high and withdrawal sets in – watch out below! 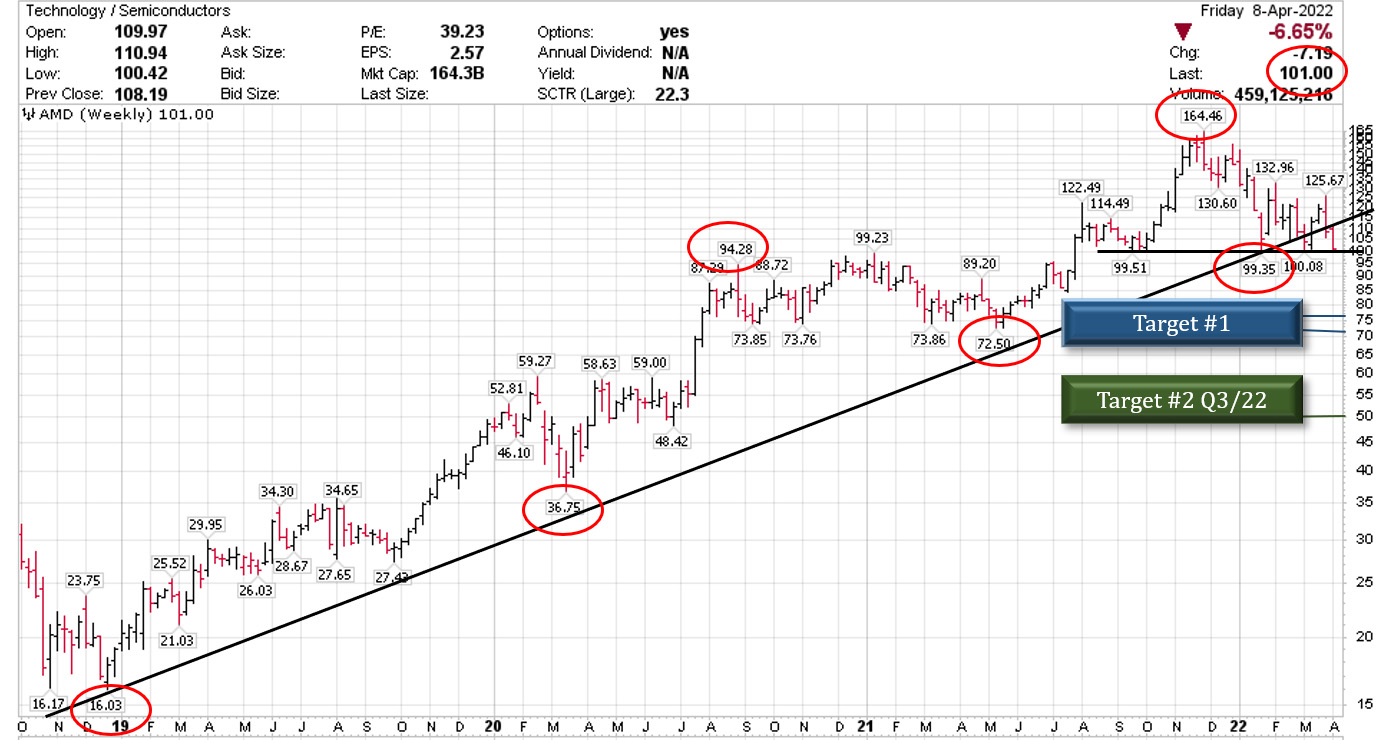 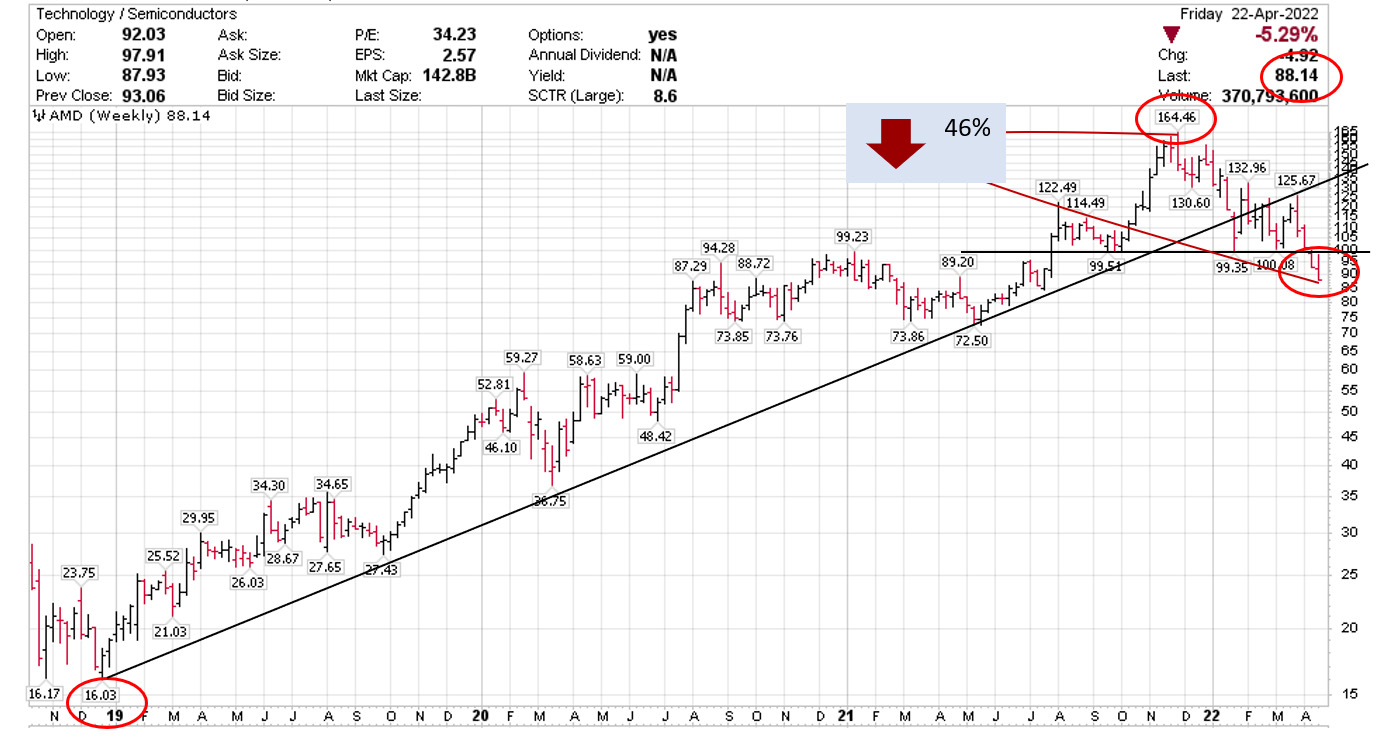 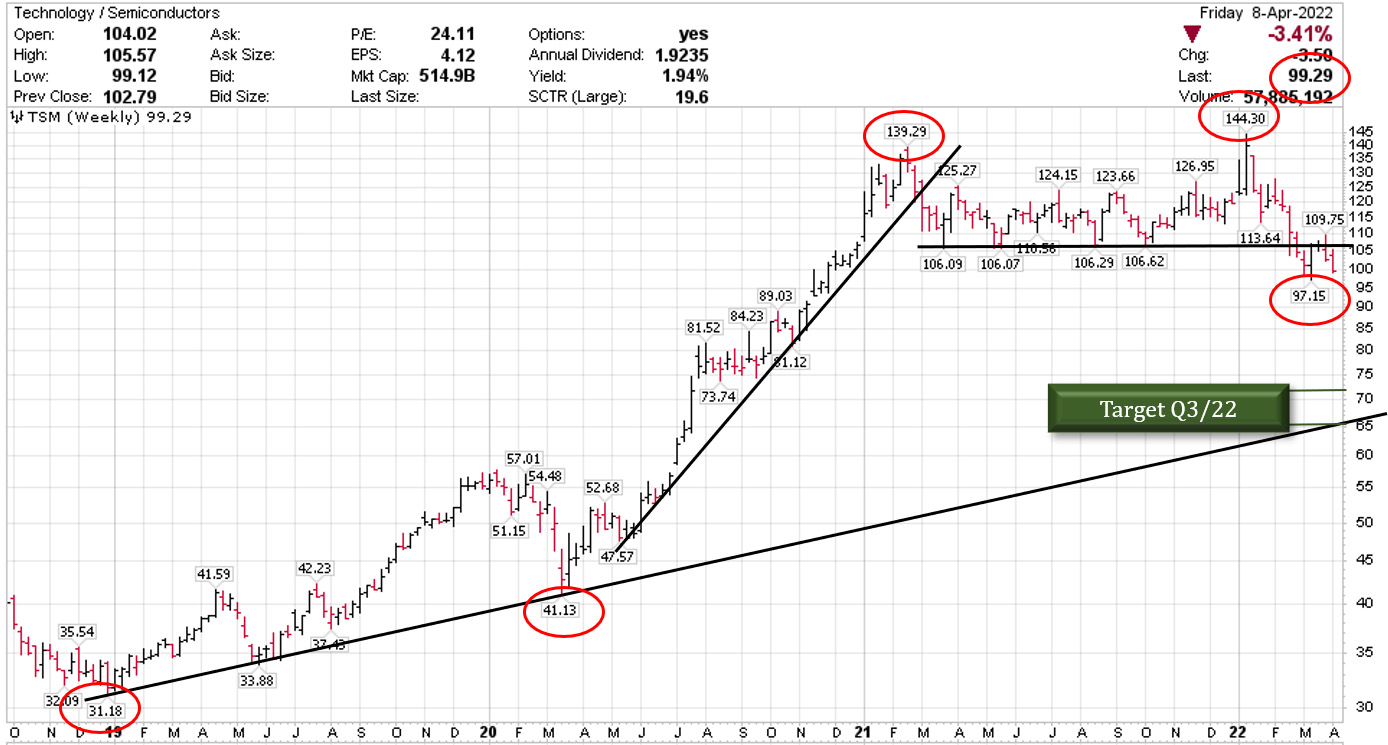 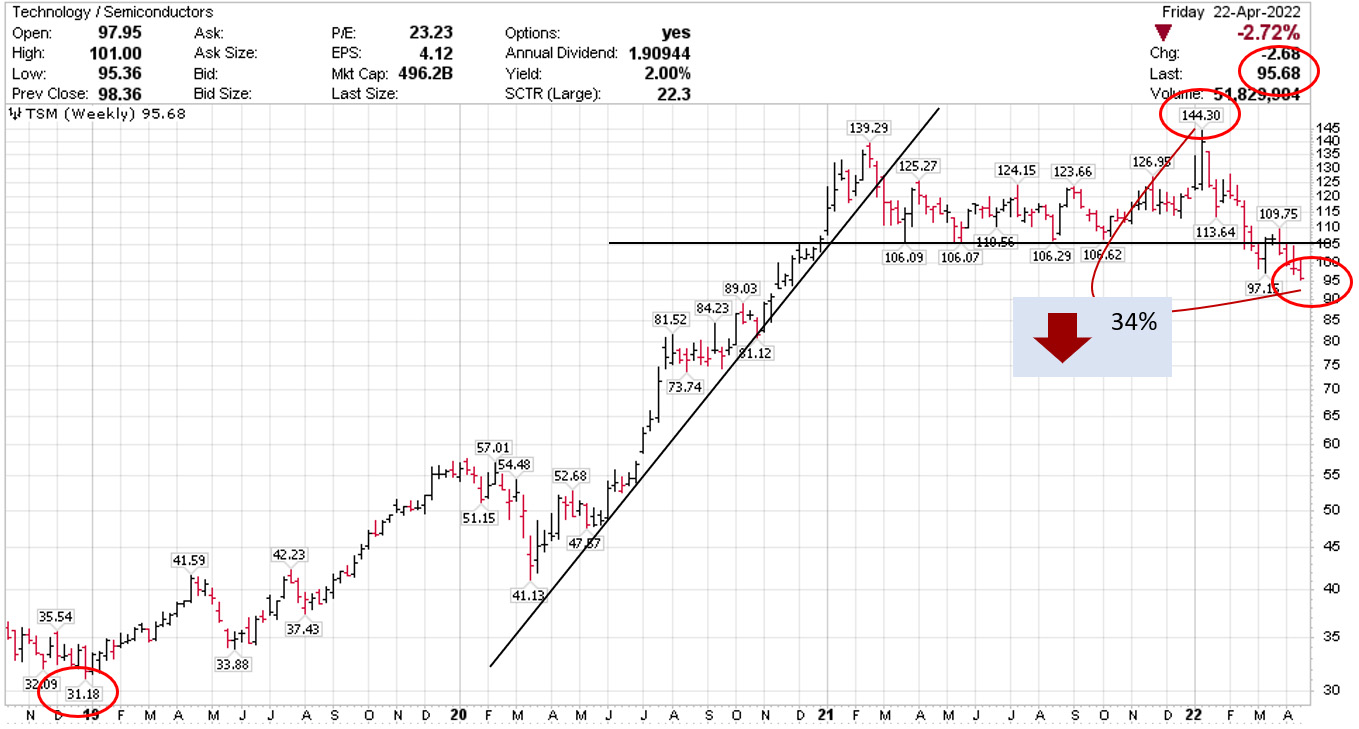 The US and Canadian stock markets are starting a major decline. Hopefully you are defensively protected as it will get even more nasty very soon. Use any days of strength to lighten up if not postured for a significant market meltdown.
< BACK
Back to Index
NEXT >