Vermilion was launched as an Alberta based exploration and production company in April 1994 when it IPO’d at $0.30 per share. From that humble start it expanded domestically and then entered France in 1997. It converted to a trust in 2003 and then started to pay a monthly dividend which started out at $0.17 per month. In 2004 it entered the Netherlands, in 2005 Australia and in 2009 into Ireland. With the end of the Trusts in 2010 it converted to a corporate structure and continued to pay a monthly dividend. It has never missed a dividend payment and has raised the monthly dividend four times since inaugurating its dividend in 2003 to its current rate of $0.23 per month or $2.76 per year which provides a current yield of 6% (Chart #1).

VET entered Germany, the US and Hungary in 2014 and in 2016 it entered Eastern and Central Europe (CEE) with concessions in Croatia and Slovakia.

Vermilion likes these international markets as they get higher pricing especially for natural gas (Chart #2).

VET’s approach is to invest in areas (Chart #3) that they see generating significant free cash flow over time so that they can use the excess funds for new growth areas, pay the overhead and interest costs and fund a rising dividend. It is a model that some domestic companies are now trying to emulate.

The stock does not follow normal valuation methods such as price to cash flow, price to book value or price to NAV, as these metrics do not fit for this company which is a growing dividend payer. For VET we are using a dividend yield range. The normal high in yield when the stock is depressed is near the 7% yield range (except when stock markets and oil prices crash (like in 2008 and 2016 when yields reached 10% for a very short period of time), and the low in yield when the stock is buoyant appears to be below 4%.

This year they made their largest investment so far with the acquisition for $1.4B of Spartan Energy in a share exchange that added 27.9M shares. This added around 23,000 boe/d of mostly light oil in Saskatchewan.

Vermilion Presents a Defensive Issue in a Volatile Market

Vermilion runs a decentralized business unit structure with three regions. The largest is North America (based in Calgary), Europe (based in the Netherlands) and Australia (based in Perth).

Each business unit has integrated technical teams, who develop capital proposals and compete for capital with the Calgary head office managing the process (Chart #5).

In 2018, $500M will be spent on activity (excluding the acquisition cost of Spartan) of which over half will be in Canada and meaningful amounts spent in France and Australia (Chart #6).

Vermilion’s effective corporate decline rate is low versus other companies of its size, which are typically in the 30% range. Its focused acquisition approach has created an overall production portfolio with a 16% decline rate with the highest declines in the US and Canada at 28% and 23% respectively (Chart #8).

In December 2017, before the Spartan Energy acquisition, Vermilion had 505 full time employees worldwide of which 172 were in the Calgary head office, 55 in its Canadian field offices, 59 employees in the Netherlands office, 31 in Australia, nine in the US, 24 in Germany, five in Hungary and one in Croatia.

VET has a significant institutional ownership base (70%+) but no Institutional investors owns over 5%.

In Canada the focus is on SE Saskatchewan and in West Central Alberta (Chart #9). Production in Q2/18 was 44,600 boe/d of which liquids were 52% of the total. The growth rate is moderate and VET is working to lower costs, increase recoveries and move the business to a greater free cash flow generating one. Spartan added 23,000 boe/d at a flowing boe cost of $60,900 per barrel. 2P reserve additions were 113.5Mb of which 92% were liquids (Chart #10).

In Europe they have a concentrated area with profitable businesses in both liquids and natural gas (Chart #11). Long term the two areas with the largest volume upside is in Germany where VET holds 26% of licensed land in the north German basin (two 500 Bcf targets) and where they have developed some high impact prospects to be drilled starting next year (Chart #12). In the CEE (Central & Eastern Europe area) it is early in the technical work but they have large land spreads and initial success in Hungary (Chart #13) with the first well to come on stream this quarter. Land holdings in Hungary are 653K net acres, 92K net in Slovakia and 2.35M in Croatia. 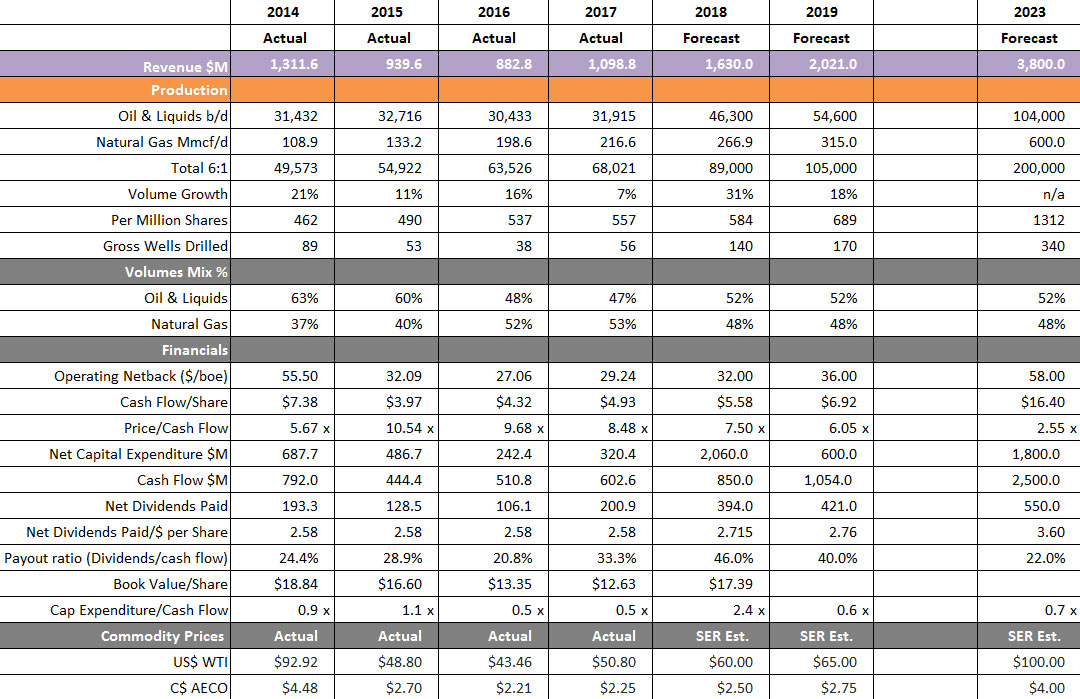 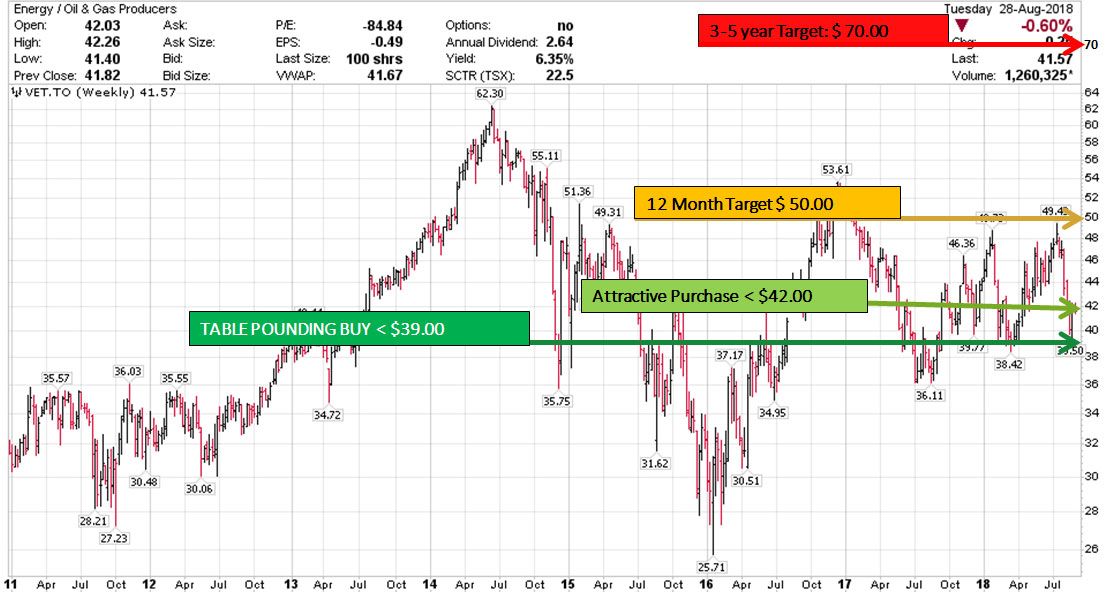